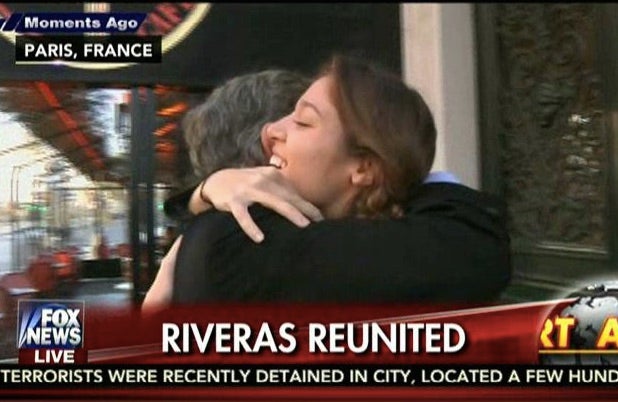 Geraldo Rivera has covered wars from the battlefield for over 40 years, but he’s never been more afraid than he was last Friday, when for an hour, he didn’t know if his daughter was still alive in Paris.

“It almost gave me a heart attack,” Rivera told TheWrap in an interview on Monday about not being able to get in touch with his 21-year-old daughter Simone, a foreign exchange student in Paris, after news of the terrorist attacks broke.

“This was far worse than anything else I’ve ever experienced,” he continued, calling the fear he felt for his child’s life much scarier than any war he’s ever covered.

Rivera wasn’t initially aware Simone and her roommate went to the soccer stadium where ISIS militants detonated bombs. After receiving no response from Simone in a series of text messages, Rivera learned she’d gone to the game.

Fear of the worst scenario quickly sunk in: “This is something where you feel helpless, you feel anxiety that is malignant,” he said.

When he received a text from Simone’s friend that they were OK, Rivera frantically called friends in Paris to rescue his daughter from the chaos at the soccer stadium, where like many, she had no access to transportation or a hotel.

“Picture these young Americans abroad almost feeling desperate; they heard the explosion and didn’t know what was going on,” he said.

After reuniting with his daughter in Paris on Saturday (pictured above) and getting a few days to collect his thoughts, Rivera didn’t mince words about President Obama’s response to the attacks.

“I think he is malignantly naive,” Rivera said, calling ISIS a de facto nation and directly disagreeing with the president, who has advised Americans not to categorize ISIS as such since that’s what they want.

Obama’s been too “muted” and “nuanced” in reaction to the Paris attacks, Rivera said. “We need to respond by declaring war on them… if we don’t kill them, they’re going to kill us.”

He offered specifics, calling for Russia, the U.S. and our Middle East Allies to join forces in a war against ISIS– even if have to drag the latter in “kicking and screaming.”

“I want a massive ground campaign to conquer ISIS once and for all,” Rivera said.

For now, he gets to hug his daughter again; a small, but maybe bigger victory for the news veteran.