In the early ’80s, Geri Jewell was hand-picked by Norman Lear for his show "The Facts of Life," making her the first person with a visible disability — cerebral palsy — to appear as a regular performer on a primetime sitcom (pictured left).

The show was a huge hit … and Jewell was a huge. She couldn’t go to Disneyland without being bombarded by fans. 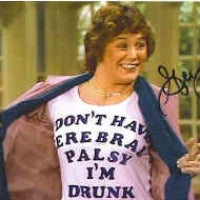 She didn’t work for another two decades, when she was hired in 2004 for a nine-episode arc on ”The Young and the Restless,” and that was followed by a prominent stint in the HBO series "Deadwood," as a crippled woman, Jewel (below), who faces the abuse of her intolerant 1867 western town.

"I helped David Milch develop the character, and I said to him, ‘How can this be realistic? Cerebral palsy wasn’t even diagnosed then,’" she told TheWrap. "He said, ‘It was around, we just didn’t know what the f— it was.’ Back then, people with disabilities were not seen — they were kept in a closet or a bedroom and for the most part left to die. Jewel was the exception to the rule, because she challenged everybody in ‘Deadwood’ with her spirit and moxy and broke barriers." 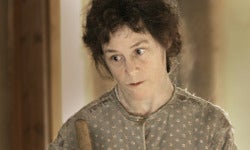 But since that series ended, Jewell says she’s only been sent out on a scant three auditions in the last three years.

"The only time I get sent out is if they’re specifically looking for people with a disability, and that’s absurd," she said.

"I’m not sent for any role that has to do with being a woman in the age frame that I am. Why am I not sent out when I’ve been in the industry for 30 years? I never get the benefit of riding on my success — the minute the show ends, all of a sudden I’m back at square one again."

Jewell says she’s hopeful that disabled performers will be able to appears in roles not specific to their illnesses.

"When have you ever seen a person with a physical disability on ‘Brothers & Sisters" or "Desperate Housewives?" Jewell said. "We could be putting a person with a disability in a positive light to be a role model, but no one’s doing it. We need to change that word from ‘risk’ to ‘gift.’"