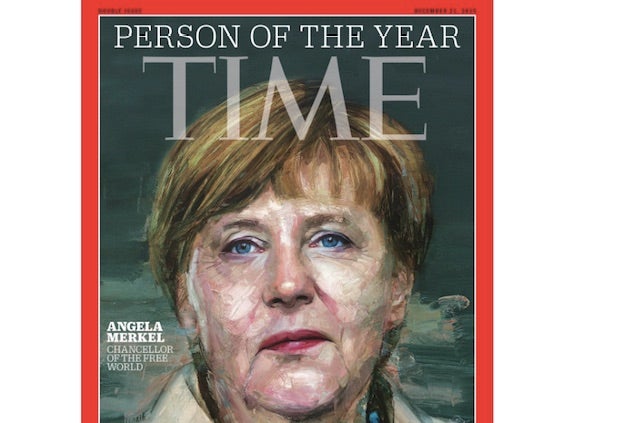 TIME named German Chancellor Angela Merkel its Person of the Year on Wednesday.

Merkel, in her 10th year as the leader of Germany, was chosen for her “steadfast moral leadership in a world where it is in short supply.”

“Not once or twice but three times there has been reason to wonder this year whether Europe could continue to exist, not culturally or geographically but as a historic experiment in ambitious statecraft,” TIME wrote about the continent’s tumultuous year.

The magazine pointed to Merkel’s activism during Europe’s debt crises; responding for the West in the face of Vladimir Putin’s “creeping theft of Ukraine”;  leading Germany as Greece’s bankruptcy threatened the existence of the Euro Zone and in the face of the Syrian refugee crisis.

Each time Merkel stepped in. Germany would bail Greece out, on her strict terms. It would welcome refugees as casualties of radical Islamist savagery, not carriers of it. And it would deploy troops abroad in the fight against ISIS…. You can agree with her or not, but she is not taking the easy road. Leaders are tested only when people don’t want to follow. For asking more of her country than most politicians would dare, for standing firm against tyranny as well as expedience and for providing steadfast moral leadership in a world where it is in short supply, Angela Merkel is TIME’s Person of the Year.

Also Read: Competing With Time Magazine, CNN's Don Lemon Announces His Own 'Person of The Year'

Merkel is just the fourth woman since 1927 to be named Person of the Year.