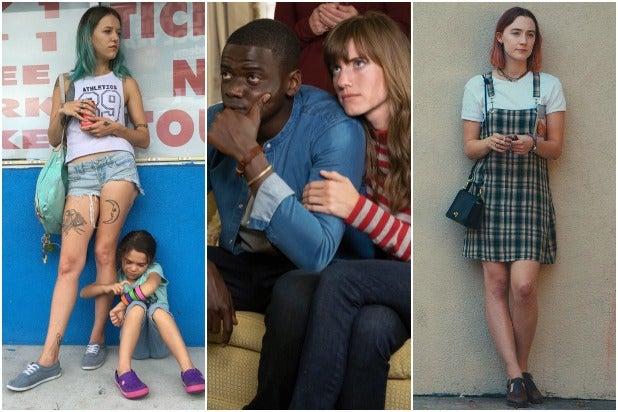 “The Florida Project,” “Lady Bird,” “Get Out,” “Call Me by Your Name” and “The Rider” have been nominated as the best independent films of 2017 at the Film Independent Spirit Awards, Film Independent announced on Tuesday.

Luca Guadagnino’s “Call Me by Your Name” received the most nominations, six, followed by “Get Out” and “Good Time” with five and “Lady Bird” and “The Rider” with four.

Acting nominees included Salma Hayek for “Beatriz at Dinner,” Frances McDormand and Sam Rockwell for “Three Billboards Outside Ebbing Missouri,” Holly Hunter for “The Big Sick,” Saoirse Ronan and Laurie Metcalf for “Lady Bird” and Armie Hammer and Timothee Chalamet for “Call Me by Your Name.”

In true Spirit Awards fashion, the acting nominations also went to several performers whose films were largely under the radar of other awards voters: Regina Williams for”Life and nothing more,” Harris Dickinson for “Beach Rats,” Nnamdi Asomugha for “Crown Heights” and Shinobu Terajima for “Oh Lucy!”

Best director nominations went to Guadagnino, Sean Baker for “The Florida Project,” the Safdie brothers for “Good Time,” Jonas Carpignano for “A Ciambra” and Chloe Zhao for “The Rider,” an indie western that was probably the biggest surprise among the nominations.

To qualify for the Spirit Awards, a film must meet a variety of criteria, including a budget of less than $20 million and “significant American content,” or U.S. citizens or permanent residents in two of the three creative positions of director, writer and producer. (While “Three Billboards” was written and directed by the Irish-British Martin McDonagh, the fact that it was set and filmed in the U.S. was enough to qualify it.)

Nominations are chosen by a variety of nominating committees, a process that lends itself to surprises and offbeat choices more than most other awards shows.

Final voting is now in the hands of the members of Film Independent, an organization made up both of film professionals and movie fans who pay the annual membership fee.

The Spirit Awards have gotten closer to the Academy Awards in recent years, with the last four Best Feature winners, and five of the last six, going on to win the Oscar for Best Picture. (In the previous 26 years, that had only happened once.)

In the acting categories, less than a third of the Spirit nominees are typically recognized by Oscar voters.

The nominations were announced at a press conference by Lily Collins and Tessa Thompson.

The 2018 Spirit Awards will be held on Saturday, March 3, 2018 and broadcast live on IFC. Nick Kroll and John Mulaney will host for the second year in a row.

JOHN CASSAVETES AWARD – Given to the best feature made for under $500,000. (Award given to the writer, director and producer. Executive Producers are not awarded.)
“Dayveon”
“A Ghost Story”
“Life and nothing more”
“Most Beautiful Island”
“The Transfiguration”

ROBERT ALTMAN AWARD – Given to one film’s director, casting director and ensemble cast

See what Hollywood’s biggest stars are wearing as they head into the show, hosted by Nick Kroll and John Mulaney

See what Hollywood’s biggest stars are wearing as they head into the Independent awards show, hosted by Nick Kroll and John Mulaney