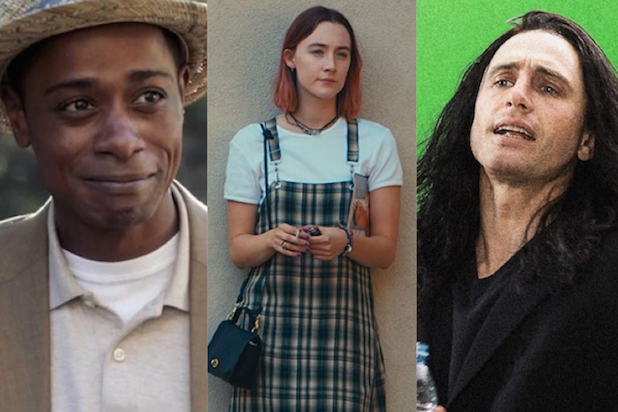 Greta Gerwig’s “Lady Bird,” Jordan Peele’s “Get Out” and Scott Neustadter and Michael H. Weber’s “The Disaster Artist” are among the screenplays nominated for the Writers Guild Awards, the WGA, West and WGA, East announced on Thursday.

In the original screenplay category, “Lady Bird” and “Get Out” will compete with “The Big Sick,” “I, Tonya” and “The Shape of Water.”

In the adapted category, “The Disaster Artist” will face off against “Call Me by Your Name,” “Logan,” “Molly’s Game” and “Mudbound.”

Documentary nominees are “Betting on Zero,” “Jane,” “No Stone Unturned” and “Oklahoma City.”

Winners will be announced on Sunday, February 11 at simultaneous ceremonies at the Beverly Hilton in Los Angeles and the Edison Ballroom in New York City.

Unlike most guild awards, the Writers Guild Awards are only open to films that were made under the guild’s Minimum Basic Agreement or under the agreement of an affiliated international guild. That rule disqualified a few films that could contend for screenwriting Oscars, most notably Martin McDonagh’s “Three Billboards Outside Ebbing, Missouri” and Anthony McCarten’s “Darkest Hour.”

Other scripts ineligible for Writers Guild Awards are “The Killing of a Sacred Deer” and “Coco” among original screenplays, and “Victoria & Abdul” and “Film Stars Don’t Die in Liverpool” among adapted screenplays.

Also Read: SAG Awards' Winners and Losers: 'Lady Bird' and 'Get Out' Get a Boost, 'The Post' Doesn't

Among the films that were eligible for WGA Awards, the most conspicuous absences from the list of nominees were Liz Heller and Josh Singer’s “The Post” and Paul Thomas Anderson’s “Phantom Thread.”

The nomination for “Logan” has to count as the biggest surprise, though it comes in a relatively thin year for adapted screenplays.

“Get Out,” Written by Jordan Peele; Universal Pictures

“Call Me by Your Name,” Screenplay by James Ivory; Based on the Novel by André Aciman; Sony Pictures Classics

“Molly’s Game,” Screenplay by Aaron Sorkin; Based on the Book by Molly Bloom; STX Entertainment

“Mudbound,” Screenplay by Virgil Williams and Dee Rees; Based on the Novel by Hillary Jordan; Netflix