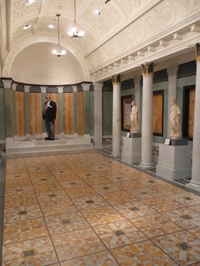 A sad sight. I went to the Getty Villa in Malibu today to see the last of the 40 objects that are in the process of being returned to Italy over the next few weeks. It was a quiet day, and a sunny one. Pieces have been quietly disappearing from one day to the next. I met Surinder Kent, a security guard, who said he had a shock on coming to work today. "I came in this morning, and he was gone," he said, referring to the towering marble statue of Apollo that stood in the central niche of the gallery called the Basilica. Normally Apollo is the main figure in a long hallway lined by the muses and gods, one of which — a Dionysus — has also been removed for restitution. "I miss him like I was missing a person," Kent said. "It’s strange. It shook me up. It’s just stone. But you get emotionally involved." He sighed. "The gallery will never be the same." The Apollo was acquired in 1985, and was looted, according to Italy, a position that the Getty accepted in its agreement to turn it over. Kent has worked here for 18 months, and said it’s a full-time education. "The beautiful thing ab 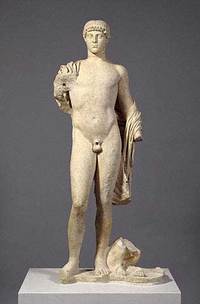 out working here is all the oohs and aahs you hear," he said. "You grow inside a little bit."  Here’s the Apollo: