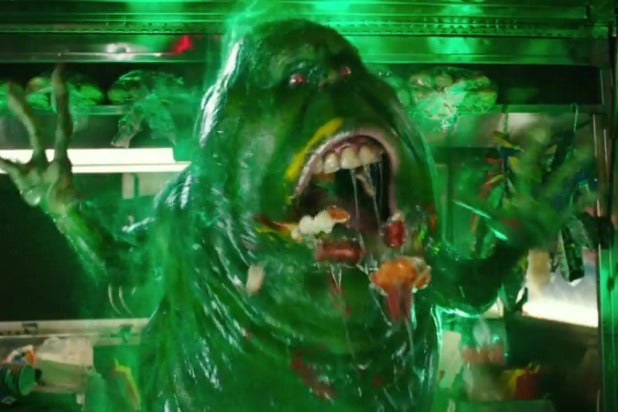 To this day, “Ghostbusters” fans still wear shirts and sport posters of the disgusting phantom known as Slimer. But the months-long process of designing him was apparently an exercise in insanity.

In an excerpt from his upcoming book, “Rubberhead Volume II: Sex, Drugs and Special FX,” monster movie maker Steve Johnson discussed how he spent months struggling with the “Ghostbusters” team getting Slimer’s look just right. The excerpt, first posted on Bloody Disgusting, is filled with sarcasm and offers a look into the mad mind of the man who made monsters for the “Nightmare on Elm Street,” “Poltergeist,” and “American Werewolf” series.

“That was the most annoying horrendous experience I’ve ever had working with art directors, producers, and directors, ever,” Johnson hisses. “In the beginning they asked for a ‘smile with arms’ but before I knew it, it was a goddamn bleeding nightmare.”

“‘Give him 13% more pathos, put ears on him, take his ears off, less pathos, more pathos, make his nose bigger, now his nose is too big, make his nose smaller…’ Are you kidding? ‘Make him more cartoony, make him less cartoony’. I almost f—ing severed my own head during that process.”

And after all of that, Johnson was told 24 hours before the final version of Slimer had to be completed to make Slimer resemble John Belushi, who was slated to play the ghost prior to his death in 1982.

“So I pulled out a stack of headshots of John Belushi, poured a gram of cocaine on it and started chopping lines up,” Johnson said, completing his wild story by saying that the ghost of Belushi himself appeared to him in the final hours and told him, “Watch that s–t Steve, it’ll kill you.” That was referring to the cocaine, which was part of the drug injection that killed the comedian.

Johnson has launched a Kickstarter campaign for “Rubberhead, Volume II,” which will contain more bizarre stories from the SFX artist’s career. The campaign ends on Wednesday.