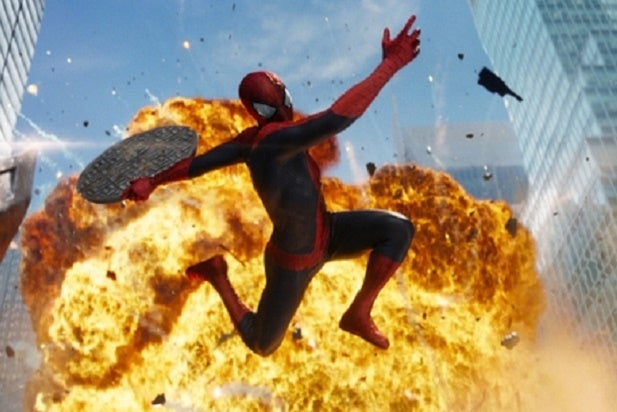 Effects-heavy comic book movies like “The Amazing Spider-Man 2” are ideal for IMAX and Premium Large Format screens, and audiences have figured that out.

Seventeen percent, or $15.6 million, of the $92 million taken in by Sony’s Marvel superhero sequel in its opening this weekend came from giant screens. That means it wasn’t just fan boys who chose to super-size their Spidey — and pay the accompanying premium ticket prices.

“It’s always about the movie first, but I think all kinds of people are coming to understand that it’s about the experience too,”said Steve Bunnell, executive vice president of global content programming  at exhibition chain Cinemark Theaters. “When you get a movie that so well-suited for that treatment, you’ve got something.”

That strong showing comes on the heels of “Captain America: The Winter Soldier,” which rode similar large percentages for IMAX and PLF to its $95 million April debut, still the year’s best.

Most analysts didn’t think this summer’s overall box office would match last year’s, and that was before “Fast & Furious 7” moved out. No film looks likely to match the performance of “Iron Man 3,” which kicked off last summer with a $178 million opening and went on to take in $1.2 billion globally. But giant screen exhibitors could well defy any downturn, mainly due to a string of films ideally suited to be seen on 70-foot high screens.

There are two more weeks of “Amazing Spider-Man 2” ahead, and then it’s Warner Bros.’ “Godzilla,” which is building significant buzz. “X-Men: Days of Future Past” follows, and that’s just May. “Transformers: Age of Extinction” and the Tom Cruise action film “Edge of Tomorrow” are expected to be big in large format, too.

B. Riley film analyst Eric Wold is bullish on both IMAX and RealD, which he believes will see higher revenues even if the summer is off, based on the action fare and the upcharges that come with 3D and giant screens.

“The premium format-friendly slate of films this summer will buoy the results of those two companies as well as keep the downside risk to the overall industry somewhat limited with the associated higher ticket prices,” Wold said Monday.

The big-screen bonanza helped Spidey’s strong 3D percentage too, which accounted for roughly 43 percent of the grosses. That’s better than “Captain America: The Winter Soldier,” which has seen a healthy 40 percent of its domestic opening come from 3D in April. That was in line with “Man of Steel” (41 percent) and “Thor: The Dark World” (39 percent), and considerably better than last summer’s “Wolverine” (30 percent) and “World War Z” (34 percent).

When a recent screen crunch induced Cinemark to experiment by showing comedies “The Other Woman” and “The Grand Budapest Hotel” — the polar opposites of action-heavy superhero fare — on giants screens at some theaters, Bunnell was pleasantly surprised by the results.

“The grosses were very high and the audiences reacted well,” he said. “As long as they’re satisfied, they’ll keep coming back, and they might choose to see a different sort of movie the next time.”