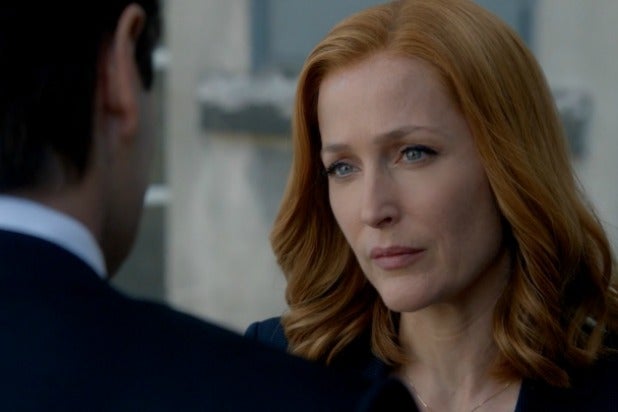 “The X-Files” will return for Season 11 on Wednesday, along with its lead characters, longtime partners Dana Scully and Fox Mulder. But when the 10-episode commitment wraps up in late March, you can expect Scully is going to be out of the game, one way or another, as Gillian Anderson is clocking out of her gig.

At New York Comic Con in October, Anderson said the latest installment of the recently revived sci-fi classic would be here last — an announcement that rattled fans. And she’s still singing that same tune before this season’s premiere.

“I’ve said from the beginning this is it for me,” Anderson told TV Guide. “I was a bit surprised by people’s [shocked] reaction to my announcement…because my understanding was that this was a single season.”

Although her exit is imminent, playing Scully one last time is still a priority for Anderson, who said, “Given the importance ‘The X-Files’ had in people’s lives, it’s great to have one more opportunity to end on a high.”
In usual “X-Files” fashion, creator Chris Carter gifted fans with a huge cliffhanger for the Season 10 finale in 2016. And now, Carter apparently has another open-ended conclusion in mind for Season 11. “There are a lot more X-Files stories to tell,” he told TV Guide. “Whether we get to tell them is a question mark. The truth is out there.”

Well, if it’s still out there, it’s gonna be out there without Scully.