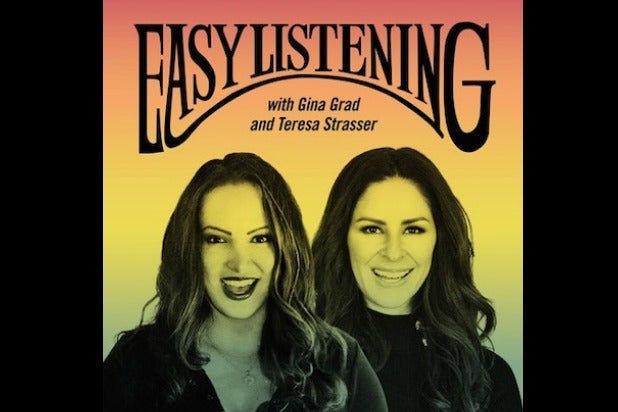 Gina Grad and Teresa Strasser’s new podcast is only 10 episodes old — today — but it has already undergone some big changes.

“Easy Listening,” co-hosted by the current and former “Adam Carolla Show” news girls, was originally titled “PodSoup With Gina and Teresa.” The name swap was pretty quickly followed by a platform shift.

Strasser came up with the idea for “a podcast about podcasts” — which it still is — “like seven years ago, maybe more,” Grad told TheWrap. By the time the busy radio vets found themselves in a position to actually launch this thing, at least two other podcasts had taken their title.

Not cool, other guys.

Now officially known as “Easy Listening With Gina Grad and Teresa Strasser,” fans can find the longtime friends — who have a knack of making listeners feel like their longtime friends — on Spotify and the soon-to-be-vanquished Apple iTunes. Where you can’t find it anymore is PodcastOne, the originally intended platform that Grad and Strasser say just didn’t pan out despite both sides’ best efforts.

“We love PodcastOne and I personally love working with them through the ‘Adam Carolla Show,'” Grad said. “This is just something that we’re trying on our own for the time being and we’re so open to revisiting a partnership in the future.”

TheWrap reached out to PodcastOne with a request for comment on the “PodSoup”/”Easy Listening” platform change, but we did not immediately hear back.

As the young show grows, Strasser and Grad say they are open to returning to PodcastOne, the medium-leading platform that Grad is already on as a beloved part of its crown jewel, “ACS.”

For now, Grad and Strasser say they’re making a go of it with Patreon, “a few advertisers,” and a built-in and loyal Adam Carolla fanbase. They’re profitable, “Which surprises and delights us,” Grad said, and expect to start adding live reads later this month.

While we had the “Carolla Show” news girls circa 2006-2010 (Strasser, including the KLSX terrestrial radio show days) and 2015-present (Grad), there were a few things to ask on behalf of the fans. Like, for starters, the Carolla “pirate ship’s” internal “news girl” title — does that bother the very-much-grown women in this current climate? The answer probably won’t surprise regular listeners, and the question didn’t surprise our interview subjects.

“But I think in this case, the title is a term of endearment — at least on this show,” she continued, adding that “news girl” isn’t what she uses on her resume or in every conversation. “You have to understand your audience because you don’t want to undersell yourself if somebody’s not in on the joke.”

Also Read: 12 Podcasts That Should Be Turned Into TV Shows (Photos)

Those who aren’t in on “The Adam Carolla Show” — but who are particularly observant — probably noticed that five-year gap between Strasser’s exit and Grad’s hire. Those were the Alison Rosen days, which had a pretty good run and a pretty rocky ending.

We asked Grad and Strasser if they’d be open to having Rosen, who herself hosts the “Alison Rosen Is Your New Best Friend” podcast on their show, giving the regular format a week off in favor of big download numbers and an extra-buzzy Reddit thread.

“Sure,” Grad responded. “I don’t know Alison. Literally, I think I met her once. It’s funny, especially now that I’ve been there for like four-and-a-half years I don’t get it as much if at all, but when the transition happened, everyone thought there was some personal connection or I had some personal insight. I have the least personal insight of any listener — or any person. I was coming in and asked to do a job. So I didn’t have any — and still don’t — personal connection whatsoever.”

“But I’d be more than happy to,” Grad said, adding that Rosen “seems really smart and cool.”

Strasser took it a step further, suggesting we facilitate those talks. We just might do that — what say you, comment section?

(Easy) Listen to Grad and Strasser discuss the podcasts they’re into — and their lives — here.