In the vein of “Toy Story” and “Mister Rogers’ Neighborhood,” Netflix’s miniseries “Lost Ollie” treats its young, target audience as people who can grasp weighty subjects like grief without being condescended to. At the same time, the live-action/animated hybrid series, from Shannon Tindle and directed by Peter Ramsey, offers family-friendly programming that allows adults to access a lost sense of childhood — something star Gina Rodriguez feels is a “huge gift” to both her younger and current self.

“There was an unbelievable clarity to the vision [Ramsey and Tindle] had and it was undeniable and the scripts were just so beautiful, and just so nuanced, where it has joy and levity, and it has this quest and this action-adventure fulfillment, and then it also has really difficult subject matters that aren’t always presented to the young,” Rodriguez told TheWrap.

The four-part limited series, which premieres Aug. 24 on the streamer, and is inspired by the book “Ollie’s Odyssey” by renowned author and illustrator William Joyce, follows the toy Ollie (voiced by “Frozen’s” Jonathan Groff) who braves myriad obstacles to reunite with Billy, the boy who lost him. At the same time, “Lost Ollie” digs into Billy’s life, his journey with loss and relationship with his weary father (Jake Johnson) and sick mother (Rodriguez).

Rodriguez said she appreciated the series’ approach to exploring themes of pain, anger and sadness, likening the show to programming she enjoyed while growing up. “To talk to kids in a way that you’re talking to them, not down at them — I really appreciated that because it reminded me of that time, where I wanted to talk about things that were scary or concerning to me but there wasn’t really much space to do that,” the “Jane the Virgin” star said.

Aside from that, the actress felt a “massive challenge” to act “across from a puppet, and [VFX] balls and like, ‘How do I get there? How do I do this? How do I do this justice?’” she recalled. “And I really just wanted to try my best.” 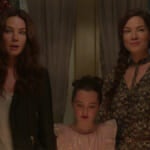 Also Read:
‘Echoes’ Ending Explained: Michelle Monaghan and Showrunner on Which Twin Appeared at the End

Speaking to the comfort the series brought to her as an adult, Rodriguez added, “It’s that it brings a nostalgia to the adults watching — that time in their lives, when they have that connection, when they had that burst of creativity. And then like, it made me go, ‘Where did I lose that?’ And I feel very lucky because as an actor, I’m always playing pretend. I got into a life where I get to continue to play pretend and continue to be that kid for the rest of my life, but shooting ‘Lost Ollie’ made me connect to parts of my childhood that I completely forgot, and being able to act across from a puppet reignited that sense of play.”

The actress said she had to “exist” in her imagination to perform in “Lost Ollie.”

“It felt like a huge gift they gave me that hadn’t been there in a while,” she concluded. “I hadn’t ventured into those spaces of me in a long time. And I do know that the show gives adults that opportunity to go back and be like, ‘Well, what were my memories of that and what was my favorite toy and where did that stop? And why did that stop? And where are the things in between that are not real but still feel like magic exists for me?’” 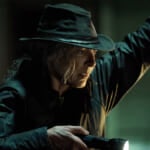