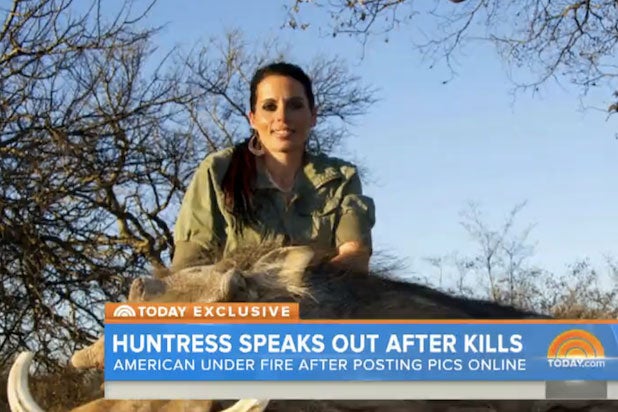 Idaho big-game huntress Sabrina Corgatelli spoke out to the “Today” show’s Carson Daly on Monday after receiving major backlash for a legal hunt she participated in during a recent trip to South Africa.

The hunt occurred around the same time now-infamous Minnesota dentist Walter Palmer killed Zimbabwe’s famous lion Cecil without a permit. Palmer has since closed his business and gone into hiding, but Corgatelli is standing by her recreational pastime.

“To me it’s not just killing an animal, it’s the hunt. There’s a lot of personal things in my life that have happened recently that has added to that,” she told Daly via video chat. “Everybody just thinks we’re cold-hearted killers, and it’s not that. There is a connection with the animal, and just because we hunt them doesn’t mean we don’t have a respect for them.”

The huntress posted pictures of the animals she hunted in South Africa’s Kruger National Park on her Facebook page, including a giraffe and a warthog. Her posts have amassed thousands of comments, many of which come from users condemning her kills.

Some of the commenters posted personal information about her job, which she finds absurd.

“Everything I’ve done here is legal, so how can you fault somebody because of their hobbies?” Corgatelli asked. “How can an employer chastise you for something you do on your personal time that’s legally done?”