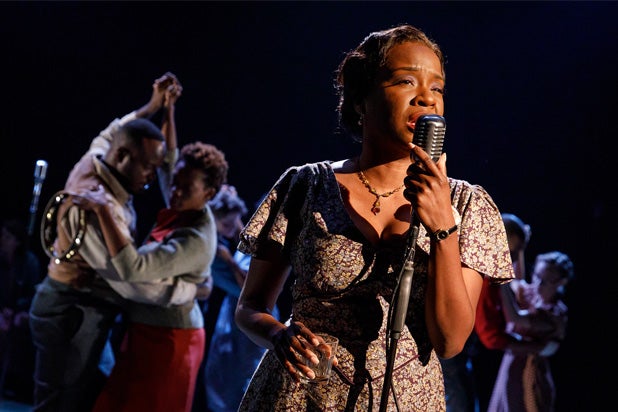 When it comes to Bob Dylan and the theater, maybe the third time will be the charm. Twyla Tharp fashioned “The Times They Are A-Changin'” around the Nobel Prize-winning writer’s songs; the esteemed choreographer set that show “sometime between awake and asleep” and it lasted about two months on Broadway.

Conor McPherson takes a very different approach to Dylan’s vast songbook with his “Girl From the North Country,” which had its American premiere Monday at the Public Theater. The Irish playwright-director delivers a Depression-era melodrama in which several very ordinary people with deep financial problems, among other troubles, meet one fateful Thanksgiving week in 1934. The setting is a boarding house in Dylan’s hometown in Duluth, Minnesota, and the play could be titled “Not So Grand Hotel.”

McPherson’s writing is much more William Inge than it is either Lanford Wilson or vintage MGM, although the abandoned baby left in somebody’s luggage does bring to mind several weepers of the 1930s and ’40s.

Also Read: 'The Nap' Broadway Review: Nobody Takes a Rest in This Outrageous Comedy

The Inge tropes here include no fewer than two unwed mothers (Jeannette Bayardelle and Kimber Sprawl), a folksy country doctor (Robert Joy), a Bible salesman con artist (David Pittu), a dreamer-loser husband (Marc Kudisch) and his sexually frustrated wife (Luba Mason) and their mentally challenged adult son (Todd Almond), a falsely accused ex-con boxer (Sydney James Harcourt), and, of course, a young writer (Colton Ryan) whose talents will be squandered if he doesn’t escape small-town America. Where McPherson does Inge one better is with his creation of the Crazy Female Sage.

Mare Winningham plays Elizabeth Laine in “Girl from the North Country,” and Elizabeth is such a Mare Winningham role that we know after one minute of stage time that this comfy-as-an-old-rocking-chair woman isn’t really nuts but an oracle who merely exhibits, but doesn’t suffer from, the last stages of Alzheimer’s.

Elizabeth’s husband, Nick (Stephen Bogardus), works tirelessly to run the boarding house but has time for an affair with one of the tenants (Bayardelle). Nick makes a big deal out of Elizabeth needing to be spoon-fed very slowly, otherwise she’ll choke. But moments later, we watch as Elizabeth walks, drinks, and dances just fine. Elizabeth also has no problem speaking all sorts of charming four-letter words that endear her to everyone when she isn’t wielding a butcher’s knife or a loaded pistol. Nick says Elizabeth doesn’t understand what’s being said about her, but, of course, she does understand, because the playwright is speaking directly through her.

Pulling this story together is the job of the folksy country doctor who narrates “Girl.” The use of a narrator often means that a screenplay is in trouble. That goes double for a play or musical, not that this doctor is much help in the clarity department.

In one long digression, he delivers Nick’s backstory on how he came to Duluth; the journey had something to do with his little sister falling down a taconite hole. The Midwest is just rife with lurking taconite holes. At play’s end, the doctor gives us a quick wrap-up of what happens to all the characters, but admits that some of these events happened after his own death.

I had to laugh out loud when the doctor mentioned that the young writer moved “down to New York City.” As someone who once lived in Minnesota, I never heard of anyone going “down to New York City” from that state. I also never heard anyone refer to a boarding house as a “guest house,” which in this part of the country is something else entirely. And unknown to me is that great American holiday known as Thanksgiving Eve in which a lot of people gather to dance, get drunk, load up on prescription drugs and watch fireworks.

McPherson also puts a #MeToo moment in his play. The “girl” of the title is Elizabeth and Nick’s adopted black teenage daughter, Marianne (Sprawl), who is pregnant. When a sexagenarian shop owner (Tom Nelis) proposes marriage despite her condition, Marianne calls him a “predator.” It’s a real applause line; the character represents a strong, defiant woman standing up to the old white patriarchy.

But where McPherson goes off the racial tracks is with the old white man’s response. The script directs that he defend himself “aggressively,” which is a woeful understatement regarding what would have happened between these two people in 1934 in Duluth, Minnesota, a town infamous for its lynchings only a decade earlier.

McPherson calls his book for this musical a “play,” which is apt. The songs aren’t so much integrated into the plot as they are dropped. McPherson’s script offers the following stage direction: “We encounter a theatre where a production of this play is to be broadcast.”

This play-within-a-radio-production is not clear from McPherson’s staging. Sometimes the actors rely on body mics to project their singing voices. More often they wield a large standing microphone, the kind Frank Sinatra so famously fondled at the beginning of his career.

The problem is, Dylan’s lyrics have an authentic specificity that resist McPherson’s very detailed and very ersatz picture of Depression-era America. Even with an original score, songs don’t always have to move the story forward. They can present a character’s state of mind or be used to create a mood, but each song in the “Girl” simply stops the story.

In one respect, that’s fine. It’s great to hear over 20 Dylan songs being sung and sung well. The voices here are superb, and McPherson’s staging is most effective when he’s using his large cast as back-up singers. Especially striking is Mark Henderson’s lighting design during the musical numbers. But often I had to try to forget the story to enjoy the music. Most bizarre: When a defeated Elizabeth and Nick tell their distraught son that they’ve lost the “guest house” and are about to leave Duluth, a few bars from “Lay, Lady, Lay” are played.

In a recent interview, McPherson noted, “We found that the more the songs had nothing to do with what was happening, the better it [sic] fit.”

Bob Dylan, who turned 76 on May 24, has left an immeasurable impact on music in many ways, not the least of which is how he has placed greater emphasis on the songwriter. Thanks to songs like "Desolation Row" and "Like A Rolling Stone," greater value is now placed on artists who write the songs they perform on their own. The irony of this is that a good portion of Dylan's catalog owes its notoriety to other artists who have taken songs he wrote and turned them into smash hits.
View In Gallery
BIO Robert Hofler
Robert Hofler, TheWrap's lead theater critic, has worked as an editor at Life, Us Weekly and Variety. His books include "The Man Who Invented Rock Hudson," "Party Animals," and "Sexplosion: From Andy Warhol to A Clockwork Orange, How a Generation of Pop Rebels Broke All the Taboos." His latest book, "Money, Murder, and Dominick Dunne," is now in paperback.