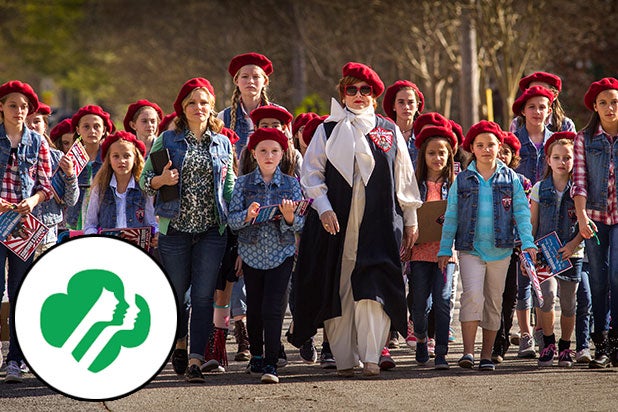 The Girl Scouts of America insist they’re not offended by Melissa McCarthy‘s send-up of the organization in her new movie “The Boss,” claiming that the movie is “hilarious” and that girls can learn “what not to do” from the R-rated movie.

“It is no surprise that ‘The Boss,’ a highly anticipated comedy film starring Melissa McCarthy and Kristen Bell, spoofed everyone’s favorite time of year,” the Girl Scouts said in a statement to TheWrap. “And don’t worry — no Girl Scouts were harmed in the making of ‘The Boss.'”

That’s a bit of a surprise given that McCarthy plays an industry titan Michelle Darnell, who goes to prison for insider trading but tries to redeem herself by leading her own troop of brownie-selling girls. They take on a more official group called Dandelions who wear khaki with army green accents (similar to the colors of Girls Scout troops).

In one scene, the rival troops of “The Boss” engage in an incredibly violent street fight, all over an upscale neighborhood each wants as sales turf.

Faces and throats are punched, hair is cut off, genitals are kicked, cars are set ablaze. It’s not the sugar and spice, say, Chris Rock‘s daughter put on with her troop at this year’s Oscars. It’s thin mints meets Reservoir Dogs.

“Given the movie’s R rating, Girl Scouts under age 17 should not watch this movie without a parent/caregiver or other adult present,” the statement added. “At the very least, Girl Scout troop leaders (both current and potential) might learn what not to do from Michelle Darnell!”

Yet, while the Girl Scouts of America’s statement refers to “Melissa’s hilarious turn as Michelle Darnell,” professional critics have been less enthused. The movie has earned a measly 18 percent on Rotten Tomatoes, with reviews slamming the “pile of mediocrity” and slamming McCarthy as “loud and grating and crass and nearly unbearable.”

However, the film still opened to a solid $985,000 at the Thursday previews, and is looking to gross between $21 million and $23 million this weekend.

The organization added, “And remember, there’s no greater form of flattery than imitation.”