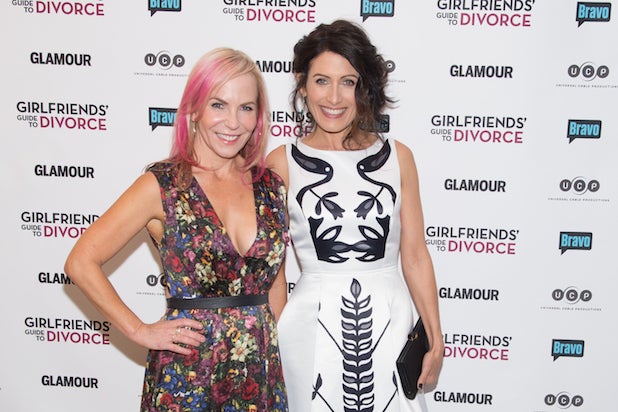 “I’ll be honest, I was totally excited,” Noxon told TheWrap. Obviously, if you look around LA and New York there were plenty of places that didn’t’ ban us. So, I was really glad that Bravo didn’t pull the ad.”

The show follows self-help book author Abby McCarthy (Lisa Edelstein, “House”), who shocks the world when she reveals that her seemingly perfect life has all been a lie: She has separated from her husband, Jake (Paul Adelstein, “Private Practice”) and has to navigate life as a single woman in her 40s.

The ads show Edelstein with her ring finger up and the text, “Go find yourself.” Instead of changing their campaign, Bravo found alternative places to display the ads, including L.A.’s city tour buses.

“I don’t think the ad is that insulting,” Noxon said. “All you have to do is look at it a second time to realize she’s not doing what you think she’s doing. It’s very clever and a little provocative and that’s exactly what we want you think of the show. So, I was just like bravo to the Bravo advertising department.”

TheWrap also spoke with Noxon about the inspiration for the show, what a genre writer finds attractive about a romantic comedy and Janeane Garofalo’s early exit from the series.

TheWrap: How did you come around to creating a show inspired by Vicki Iovine’s books?
Marti Noxon: I was going through my own situation and I met Meryl Poster, who’s an executive producer on the show, for breakfast one day and she asked, ‘How are you doing?” And, I burst into tears. And we started talking about it and she told me I should write about this. I couldn’t imagine at that point writing about it, but the next time I saw her, probably a year later, she again told me I should write about it. And I wanted a brand to communicate through, because otherwise the show would be a big drag, something to relay the funny stuff, the secret stuff.

She told me that Vicki Iovine was writing the ‘Girlfriends’ Guide to Getting Your Groove Back’ when she found out her husband was cheating on her. And I thought that is a premise and a brand. It’s a great idea for a show. It’s a woman whose family was put out there in the public eye as the perfectly imperfect family and she always seemed to have all the answers and then all of a sudden her life goes to crap.

Is there a formula for getting over one’s divorce?
Gosh, no. I think the first season is about there being no one formula or right answer. It’s such an individual thing. And for Abby, the biggest journey is finding her way back to a real version of who she is. She has sort of gotten caught up in presenting a version of herself and her family. And now that her career is in the toilet, she has to find herself something that is more genuine.

Also read: Bravo 'Girlfriends' Guide to Divorce' Star on Banned Ad: 'Why Is It Racy?' (Photos)

What’s the role of Abby’s friends and what do they bring to the table?
For one thing, when you find yourself with 50-50 custody, you find yourself with a lot of time when other people who have their families are not free and you’re sitting home alone trying not to dwell. And the only ones that might be available are others going through the same thing. So, I found myself making friends with women who I might not have been friends with otherwise who were also going through divorces. Part of the fun of the show is this idea of strange bedfellows – women who might not have ever been friends but discovering in each other real support and real bonds that wouldn’t have grown otherwise.

You’re best known for your work with “Buffy the Vampire Slayer” and other genre shows and movies. What’s the draw for you of doing this type of show?
For a long time, it wasn’t something that I was drawn to. Especially in film, I continue to write a lot of genre stuff. I’ve done ‘Fright Night’ and I worked on the Lara Croft movie and ‘I Am Number Four.’ But on TV and cable, most of the stuff I’ve been really drawn to happen to be things I was really interested in that happened to have strong female characters and weren’t genre shows. The part that shares the DNA, and certainly something I learned from Joss Whedon, was that they are about unusual women. They’re very flawed. And the best writing comes from telling on yourself and the truth may be a little embarrassing, but really going personal.

What can you tell us about Janeane Garofalo’s early departure from the show?
What’s great about it is there’s a pretty good twist this season, which I think one of the lovely freedoms of cable is that you’re not as bound as you might be to following a format where one character necessarily stays for the whole season. You can pull a 180 and do something shocking by having someone exit. And that’s really true in this case. We knew that we might have a limited amount of time with her. And so when we found out that she had to go back on the road, we said all right, let’s do something we had in our back pocket. It worked out great.

“Girlfriends’ Guide to Divorce” premieres Tuesday at 10 p.m. on Bravo.