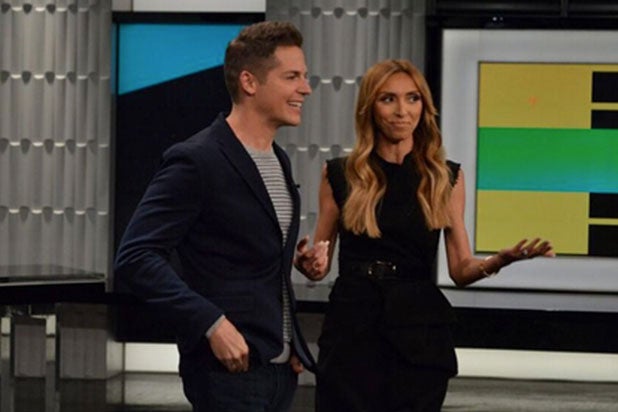 During the day, several E! News co-hosts paid tribute and bid a fond farewell to Rancie on social media — one of which was Jason Kennedy, her co-anchor on the show. Kennedy and Rancic’s husband Bill serenaded Giuliana at a karaoke bar, presumably after the show had wrapped its taping.

“Nothing like being serenaded by @billrancic & @thejasonkennedy. Watch out Billy Joel!!!” the now former E! News host posted on her instagram.

Maria Menounos will be stepping in to take Rancic’s place as the co-anchor of “E! News.” Back in July, TheWrap was first to report that Menounos would be taking over the slot vacated by Rancic, who chose to leave the network to pursue other endeavors. Immediately after the announcement of Rancic’s departure, the network began “fine print” negotiations for E! correspondent Menounos to assume the co-anchor slot.

Menounos will join the current hosting team of Kennedy, Terrence Jenkins and Catt Sadler on E!’s nightly entertainment news program. She had previously served as a fill-in co-anchor on the program.

Rancic, formerly Giuliana DePandi, was named as anchor of “E! News” in 2005, and in March 2006 she was joined by co-anchor Ryan Seacrest. She will now continue with “Fashion Police” and “Live From the Red Carpet.”

However, according to many social media tributes, Rancic will not be forgotten as the E! News host. Kennedy had been posting tributes leading up to Rancic’s final show as well.

Nothing like being serenaded by @billrancic & @thejasonkennedy. Watch out Billy Joel!!!

G’s last show is tonight, I’m already a wreck. We will attempt to sum up her 14 amazing years on @enews tonight.

One last time @giulianarancic A photo posted by Jason Kennedy (@thejasonkennedy) on Aug 10, 2015 at 4:59pm PDT