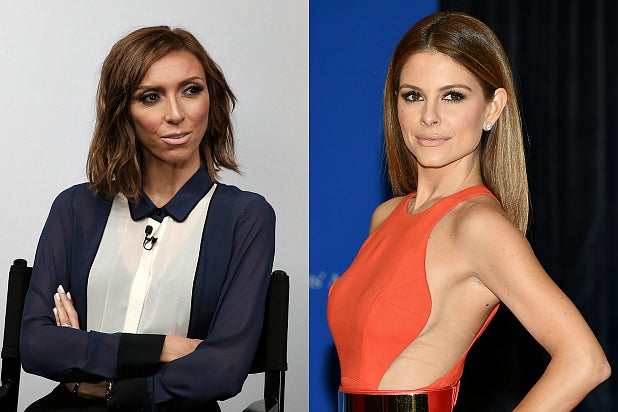 Maria Menounos will be named to a lead role on E! News, filling the pivotal slot vacated by longtime anchor Giuliana Rancic, several individuals with knowledge of the situation told TheWrap. And if the sudden announcement of Rancic’s departure gave viewers whiplash, it may be because the behind-the-scenes drama at the entertainment program is closer to an auto collision than simple housekeeping.

Insiders told TheWrap that ego and indecision lay at the heart of Rancic’s exit after 10 years in her post. Immediately after Wednesday evening’s announcement of her departure, the network began “fine print” negotiations for E! correspondent Menounos to assume the anchor slot, an individual familiar with the deal told TheWrap.

“They’re negotiating titles and it’s down to the finer details,” the insider said. “Maria will appear on ‘E! News’ within weeks.” In terms of staff response to Rancic hitting the road, the individual added, “No one’s crying.”

A spokesperson for E! declined to comment to TheWrap. Representatives for Rancic and Menounos did not immediately return TheWrap’s request for comment.

The network confirmed Rancic will stay on board the network as host of E! staples “Live From the Red Carpet” and “Fashion Police.”

Numerous insiders spoke with TheWrap about the bumpy changing of the guard, which began in 2014 when Rancic extended her contract to remain an onscreen personality and managing editor of “E! News.”

Also Read: Giuliana Rancic on 'Fashion Police': Only a Matter of Time Before Show 'Fell Apart'

“Everyone thought she was going to leave a year ago,” admitted another individual close to the news operation, “but Maria Menounos came along and she somehow decided to stay.”

Indeed, Rancic’s extension was announced May 21, 2014 and set to run through April 2016. The following day, on May 22, E! announced that Menounos had inked a multiyear deal that would roll out with “Untold,” an hour-long pop culture series featuring celebrity interviews.

Rancic’s decision to remain seemed “motivated by ego,” the insider said. “No one was that surprised she stayed — she didn’t want it to seem like she was replaced.”

Even with Rancic taking lead on the newscast, alongside co-hosts Terrence Jenkins, Catt Sadler and Jason Kennedy, both women under the same network roof created confusion for audiences and within the company’s Los Angeles office — leading to stories about a bitter rivalry between the two.

Industry and viewer speculation was fueled further in January 2015 when, seemingly without warning, Menounos turned up on E!’s “Live From The Red Carpet” as arrivals host for the Screen Actors Guild awards.

“#MariaMenounos is dying on the red carpet. So awkward and uncomfortable to watch. Where on earth is @GiulianaRancic!? #SAGAwards,” wrote one Twitter user during the awards show, one of many reactions criticizing both hosts and their network.

At the time, networks insiders said that camps were quietly aligning for both Menounos and Rancic as staffers speculated internally over which of the women would emerge as the “female face of E! News.”

A year later, Rancic became embroiled in controversy after a joke written for her on the 2015 post-Oscar edition of “Fashion Police” about young African American actress Zendaya Coleman was widely denounced as racist.

And so after 14 months the inevitable descent of Rancic and rise of Menounos finally comes to pass, leaving network executives and show producers to reset the entertainment news flagship.

There is speculation of further changes to the lineup of on-air talent. “Everything is in flux right now,” the second individual said.