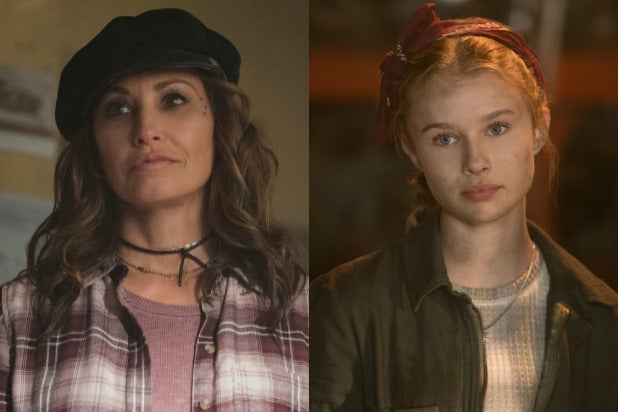 (Warning: This post contains spoilers for “Outbreak,” the Season 3 fall finale of “Riverdale.”)

The “Riverdale” fall finale set up one giant problem for the town (a quarantine) and about a million smaller (but still pressing) problems for the town’s residents.

And among the many conflicts facing the likes of Jughead (Cole Sprouse), Archie (KJ Apa), Veronica (Camila Mendes), and Betty (Lili Reinhart) when The CW’s dark take on the Archie Comics characters returns in January, showrunner Roberto Aguirre-Sacasa tells TheWrap one is a threat to Bughead shippers: Gladys Jones.

Yes, Aguirre-Sacasa says Jug’s mother Gladys and his little sister Jellybean (played by Gina Gershon and Trinity Likins, respectively, and introduced to viewers for the first time on Wednesday’s episode) “are definitely coming to town” when the show returns at midseason.

And that isn’t a good thing for the Serpent King and his queen.

“[Jughead and Betty] are going to continue working together as the investigators that they are and they are going to have these big, you know, a problem rolls into town in the character of Gladys Jones.”

As for how that whole questioning Penny Peabody thing ended (you know, how Gladys had a “girl talk” with her tonight and we didn’t actually Penny after that, but Gladys was, uh, messy?) you’ll have to wait a while to find out.

“We left it a little ambiguous,” Aguirre-Sacasa says. “Listen, we never say never on ‘Riverdale.’ Even when we see a dead body, we don’t necessarily think that’s the end of that character. But I can say, so far, we’ve seen the last of Penny. We’re pretty deep into [production on] the season and so far there hasn’t been a return to Penny Peabody.”

Aguirre-Sacasa also told us what Riverdale will look like under quarantine — and where we’re at with this Gargoyle King mystery — which you can read about here.