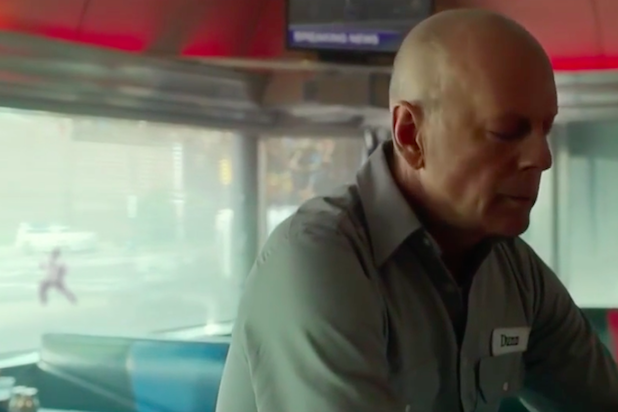 Forgive us for being tentative about this moment for M. Night Shyamalan, whose out-of-nowhere blockbuster “Split’ marked a huge comeback for the director in 2016.

Doubling down, Universal allowed the filmmaker to weave the multiple-personality inflicted villain The Horde from that film with the indestructible hero and fragile genius villain from his 2000 film “Unbreakable.”

Film exhibitors attending CinemaCon in Las Vegas on Wednesday were surprised with a full trailer for this combined universe — “Glass” — and we’re relieved to say its more confident, twisted and outright scary than we found “Split” in early days.

James McAvoy returns as The Horde, with Bruce Willis and Samuel L. Jackson reprising their “Unbreakable” roles of David Dunn and Elijah Price (a.k.a. Mr. Glass). All three have been united in a Pennsylvania mental hospital, the exclusive trailer revealed, under the care of a shrink played by Sarah Paulson.

Paulson’s speciality is treating those with such delusions of grandeur they imagine they are superheroes — but the good doctor has a major problem. These men aren’t as delusional as she thinks.

Set against the grit of Shyamalan’s beloved city of Philadelphia, The Horde gets up to his stalking-young-girls tricks again as Mr. Glass uses his extraordinary IQ to provoke the superhuman powers out of The Horde, which he’ll doubtlessly use him for his own evil plans.

Willis’ Dunn doesn’t have much to do in this footage. Paulson, rocking a creepy red ‘do, is perfect as an obsessed academic who bites off way more than she can chew. Anya Taylor-Joy, the protagonist from “Split,” also pops up for a reunion with McAvoy.

To see these genres infused with originality is exciting to say the least, but the biggest takeaway today was from Jackson himself.

“It’s about time I got the title role in my own motherf—-ing movie,” said Jackson, the titular Mr. Glass.