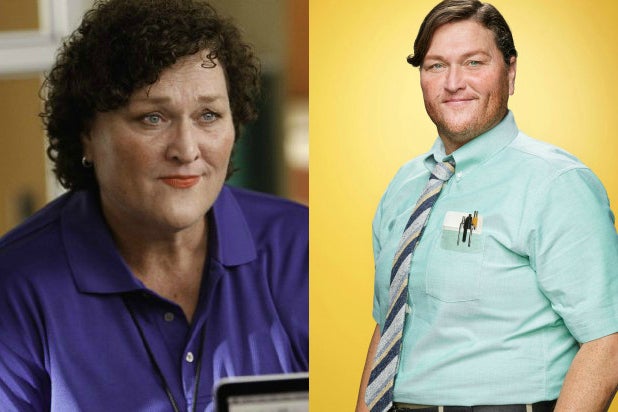 Dot-Marie Jones’ “Glee” character has gone through a pretty monumental change just as her Fox show is coming to an end; the former McKinley High School football coach Shannon Beiste is now Sheldon Beiste — sex change and everything.

While Jones knew something was up for her final story arc, she couldn’t have predicted the roller coaster to come.

“Ryan [Murphy] had told me he had big plans for my character. I didn’t know what it was,” Jones recalled to TheWrap of her conversations with the show creator. “Then I got the script and I’m reading it and … at first when I tell Jane Lynch‘s character that I had cancer, I was devastated. I was like ‘Oh my God, they can’t have my character die!'”

She continued: “Then by the end of the script I’m having a transition — my sex change — which I was kind of blown away by that, I wasn’t expecting that.”

That’s a fairly big curveball to throw at an actor who is ready to ride off into the sunset following the Fox show’s March 20 series finale, but Jones wasn’t concerned about having the chops to pull it off.

“I didn’t feel pressure from the acting aspect of it,” Jones explained. “I felt pressures in that I didn’t want to disrespect anybody. and I wanted to do the best job I could do and to make them proud.”

Still, it took a little while for her to mentally prepare for such a last-minute transition.

“I was kind of upset at first, to be honest, because I didn’t want to let down the big tomboys and the straight girls … that I’d represented in the seasons prior,” she admitted.

Plus, she had been very proud of the domestic violence storyline that Shannon had been through. That all said, the public feedback Jones has since received quickly put any temporary concerns she had to bed.

“It’s been amazing, it’s been incredibly favorable,” she said of the reception.

Sheldon’s personal transition was part of a larger “Glee” storyline, which saw the show welcome a transgender choir to its airwaves. The inclusion moved Jones.

“They were just so proud to be represented and to be seen and to be heard,” she said. “These people are just like us, there’s nothing different about them. They’re trying to live their lives as normal as possible. It was overwhelming, the tears I was crying during that show were real. It wasn’t acting.

Speaking of tears, Jones’ last-ever “Glee” scene was filmed with Matthew Morrison, a fellow Fox thespian who she’s grown extremely close with over her 47 episodes. Another friend is Lynch, whose Sue Sylvester has had, as Jones put it, “a hell of a ride” herself, which is comes to a head on Friday’s episode “The Rise & Fall of Sue Sylvester.”

Tonight, Sheldon will be one of only two people who publicly backs Sue, who supported him during the transition, per a network description.

After that, there are just three more “Glee” episodes left. The show had to bid farewell early to male lead Cory Monteith following his 2013 accidental death.

While “Glee” officially said goodbye to the actor and his character Finn Hudson in the 2013 episode “The Quarterback,” there will be one last dedication of sorts in the series finale in two weeks, Jones suggested.

“I can’t exactly say what it is, but there is something mentioned,” she said.