Plenty of new blood — including "True Blood" — enlivened the 62nd Primetime Emmy Nominations, announced on Thursday morning by the Academy of Television Arts and Sciences. Newcomer "Glee" led all series with 19 nods, while HBO led all networks with 101, including best drama for its popular vampire series and the most-nominated show, miniseries "The Pacific," with 24 nods.

Conan O’Brien drew some blood of his own, getting a measure of revenge after NBC pushed him out of “The Tonight Show” in favor of Jay Leno. O’Brien’s seven months on “Tonight” earned four nominations, including Outstanding Variety, Music or Comedy Series; Leno was blanked. 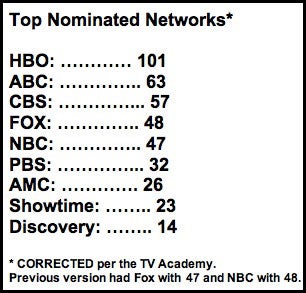 "True Blood" was just one of the first-time nominees in the marquee category of Outstanding Drama Series, whose other competitors are "Breaking Bad," "Dexter," "The Good Wife," "Lost" and the incumbent, "Mad Men."

In the comedy series category, newcomers "Glee," "Modern Family" and "Nurse Jackie" will square off against perennials "Curb Your Enthusiasm," "The Office" and reigning champ "30 Rock." The NBC show-within-a-show has had a lock on the category for three years running, but against the buzz behind "Glee" and "Modern Family," "30 Rock" is a long shot to win a fourth Emmy.

"This is great news," said "30 Rock" star/creator Tina Fey in a statement. "We're grateful and excited. Especially since today is the fifth anniversary of the day NBC forgot to cancel us." 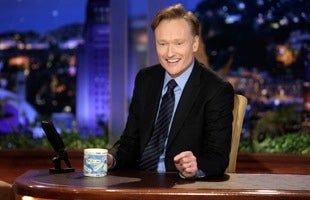 "Temple Grandin," "30 Rock" and "You Don't Know Jack" each received 15 noms, while "Modern Family" received 14 and "Saturday Night Live," the 82nd Academy Awards and the season's biggest finale, "Lost," received a dozen each.

You wouldn’t exactly call it a case of “out with the old, in with the new," but after three years of predictability, the slate of nominees is an odd blend of Emmy stalwarts and intriguing fresh faces. Many of the top nominations this year went to shows that weren’t yet on the air the last time the awards were handed out.

And among the high-profile shows that recently completed their final seasons, the TV Academy bestowed parting gifts mainly upon “Lost,” while ignoring the record-tying 20-year run of “Law & Order” and giving mostly technical kudos to “24.”

One-third of the nominees in the two marquee categories, Outstanding Drama Series and Outstanding Comedy Series, went to new shows: “Glee,” “Modern Family” and “Nurse Jackie” on the comedy side, “The Good Wife” among the dramas.

The newcomers edged out a few past nominees, including “Big Love,” “House” and “Weeds.”

And for every appearance of the usual suspects – Outstanding Reality – Competition Program had the exact same slate of nominees for the fourth year in a row, while Betty White's guest turn helped nudge “Saturday Night Live” past "ER" to become the most-nominated show in history – another category benefited from first-time nominees sliding in between the vets: first-timers Lea Michele and Matthew Morrison from “Glee” alongside Tina Fey (16 nominations and seven wins) and Alec Baldwin (10 noms, two wins).

The lead actor and actress categories were a typical mix of vets and newcomers: In the comedy actor category, for instance, Alec Baldwin, Steve Carell, Larry David and Tony Shalhoub have 46 nominations among them, while Matthew Morrison and Jim Parsons have three. 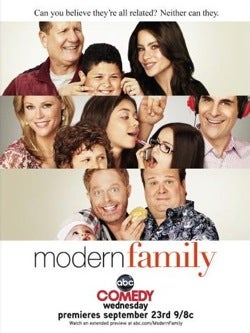 One new series, “Modern Family,” took the risky strategy of entering its entire cast in the supporting category, refusing to single any of them out as lead actors. It worked, landing three nominations for Supporting Actor in a Comedy Series (for Jesse Tyler Ferguson, Eric Stonestreet and Ty Burrell) and two for Supporting Actress (Julie Bowen and Sofia Vergara).

Among the season’s high-profile departing series, “Lost” returned to the Outstanding Drama Series category and picked up 12 nods overall.  But “Law & Order,” which this past season tied “Gunsmoke” as the longest-running primetime dramatic series in history, was shut out completely, though its spinoff “Law & Order: SVU” received a pair of nominations. And “24” picked up only five nominations, one for Guest Actor Gregory Itzin and the other four in music, sound and stunt categories.

As usual, HBO — which dominated the miniseries and TV movie categories — was the most-nominated network, its 101 noms surpassing second-place ABC by nearly 40. CBS was third, followed by NBC and Fox.

Among the HBO nominations were 15 for "You Don't Know Jack," about Jack Kevorkian. Supporting actor nominee John Goodman singled out the movie's director and cast in a statement: “It’s honor enough to be able to work with Al [Pacino], Barry [Levinson], Susan [Sarandon] and Brenda [Vaccaro]. WOW.”

The announcement was made at the TV Academy's headquarters in North Hollywood. Joel McHale of "Community" and "Modern Family's" Vergara helped Academy chairman John Schaffner present the nominees. 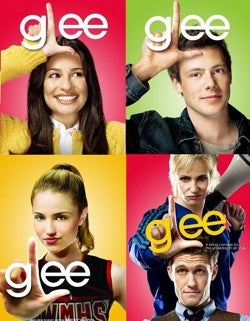 Lead Actor in a Drama Series

Lead Actress in a Drama Series

Lead Actor in a Comedy Series

Lead Actress in a Comedy Series

Supporting Actor in a Drama Series

Supporting Actor in a Comedy Series 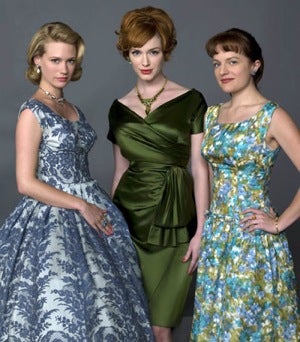 Supporting Actress in a Drama Series

Host for a Reality or Reality-Competition Program