I rarely talk about my personal life in my online posts. I rarely recap an episode, and I rarely write a commentary about a show.

However, today I will do all three.

The Fox mega-hit "Glee" has made its mark this year. It’s one of television’s biggest hits of the year. It’s the tale of a group of high school underdogs and their glee club.

One of those underdogs is Artie (played by Kevin McHale, below right). Artie is in a wheelchair because of a spinal-cord injury. 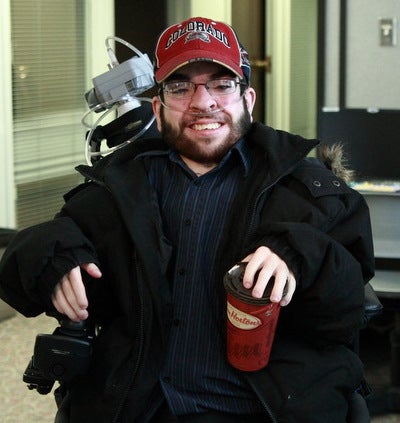 Now readers, when I first saw Artie’s character, I said, “FINALLY!” Not many of you know, but I’m also physically disabled. I am in a wheelchair (left), and it was so refreshing to see a fellow physically disabled person prominently featured in a hit show.

Artie has been a minor character for most of the series’ first season, with the exception of the great episode entitled “Wheels,” where he was highlighted.

What we know about Artie, besides the obvious ride he has, is that he’s funny, smart and witty. He also has a love interest named Tina Cohen-Chang (played by Jenna Ushkowitz).

So far, the series managed to portray Artie in a way that was pretty good, I thought. Yes, it showed his struggles with his disability, but it didn’t make him look helpless or pathetic. It didn’t make him out to be the victim.

Tonight’s episode entitled “Dream On” was about, guess what, dreams! And what was Artie’s dream? To dance.

First problem here. Did they really need to make his dream so impossible? Trust me, it would be nice to dance and walk and run, but is it a dream? Heck no. One of the first things we learn is 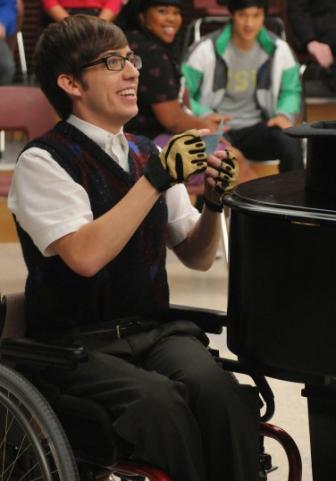 know one’s limits. So why make Artie’s dream the one thing it’s impossible to obtain? Why not make his dream to become a movie star or singer or the next Hugh Hefner.

OK, I get it, they want to create a touching moment for the audience. Moving on.

Next we have Artie trying to stand up with Tina, with the help of arm crutches. He then suddenly collapses. A heartbreaking scene, yes, but it was followed by him just … lying there.

Lying there, helpless, the victim. Seriously? After all the struggles, all the things he’s been through, he’s just going to lie there?

That scene alone played on the audience’s emotions, but in the wrong way. It made people feel sorry for Artie. Made him look like the victim, even pathetic.

Then there’s the search for a “cure.” Oh, and a dream sequence! Why is Artie all of a sudden not happy with who he is? Wasn’t the episode “Wheels” about him embracing who he is? Now the show has done a total 180.

In the end, he tells Tina, “I have to aim for dreams I can attain.” BINGO! There’s the Artie we know. That’s the message that should have been sent at the beginning of the episode. Not taking the audience on an emotional roller-coaster ride that makes them feel sorry for Artie. Trust me, that’s the last thing he wants.

The episode ends with Artie singing teary-eyed as he watches his girl dance with another guy. Again, a moment written to make the audience feel awful, feel sorry for Artie.

I get the show’s writers’ intentions, but it came out totally the wrong way, and it was borderline offensive.

No, I’m not saying I was offended. That’s the point. I don’t see myself or Artie as the tragic victim shown in tonight’s episode.

I truly hope we see a stronger Artie, a character that focuses on anything else but his disability.

Adam Wright has two goals as a writer: first to entertain, second to inform. He is a journalism student at St. Thomas University in Fredericton, New Brunswick, Canada. He loves TV, and has been the TV columnist for campus newspaper The Aquinian for more than three years. In April 2009, he launched TVDoneWright.com, offering news and opinions about television.
x