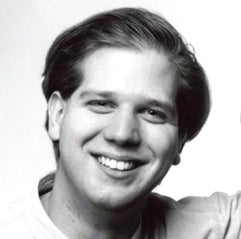 Ever wonder what Glenn Beck was like before he became, you know, Glenn Beck?

The Fairfield County Weekly has an entertainingly detailed account of the Fox News host’s early years as a drug-addled “morning zoo” deejay and talk show host in the ‘90s in Connecticut.

“When Beck arrived at Hamden-based KC101 in early 1992,” the paper recalled, “he was a semi-failed, drug-and-alcohol addicted, Top-40s radio jock desperately looking for a route to stardom.”

The dudes he worked with then are shocked Beck made it big.

"Nobody saw that coming," said Vinnie Penn, in a recent phone interview. Penn was Beck’s co-host for three years in the late 1990s on KC101’s "morning zoo" show. Back then, Beck "didn’t have your proverbial pot to piss in," adds Penn, who is now hosting his own show on Sirius satellite radio.

"I knew he was talented," Penn said. "I knew he was entertaining, very theatrical … but this is mind-boggling. … It’s a goddamn empire!"

Matt Feduzi, who did the news for that morning show, told the Weekly that he figured Beck’s chances to make it to the big time were maybe 50-50: "We used to say he’s going to be either a cult leader or a failure."

According to the paper, Beck was once punched in the face in a Clear Channel parking lot by Ron Rohmer, an ex-hockey player and a host on the same station, who was “hailed as a hero” for doing so.

But Beck earned the respect of other colleagues for his ability to, among things, get executives to allow his show to broadcast live from Jamaica.

"He had such big balls!" Feduzi said. "He could get [corporate types] to do whatever he wanted.”

Read the entire profile (“Birth of a Blowhard”) here.