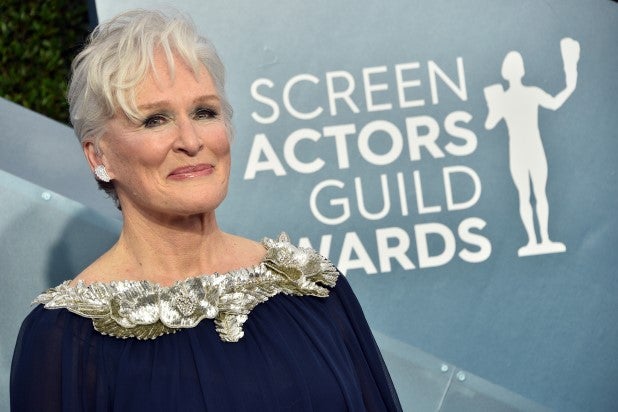 Awards season can seem like an endless series of black-tie Sunday events, especially if you’ve attended them for decades. Such was the case for veteran actress Glenn Close, who confused Sunday’s Screen Actors’ Guild Awards for the Golden Globes — twice!

The two-time SAG Award winner gave her Instagram followers a look inside the Shrine auditorium, capturing a snap with actor Bobby Canavale (the partner of her “Damages” co-star Rose Byrne). “Bobby!!! A wonderful surprise at the Golden Globes,” Close captioned the photo.

Later during the show, Close posted a video from the awards show, showing off her dinner place card (next to Rita Wilson’s) and at one point even panning past the giant Screen Actors Guild logo on the main stage. “At theGolden Globes. Such an honor to be in that room with people who have entertained and inspired me for years. A lovely evening,” she wrote.

The actress later corrected the posts. And we certainly can’t blame Close for getting the events confused as many of the attendees and winners overlapped — she presented the Best Actor award to Joaquin Phoenix, who also took home the Golden Globe in that category exactly two weeks prior.

Earlier in the evening, Close posted a video saying that she was headed to the SAG Awards, so she actually did know which awards show she was attending.

“Hi everyone, I’m back,” she said after adjusting the camera. “I’m going to the SAG Awards. I’m very, very honored to be giving the award for best actor tonight and just had the usual craziness with my wonderful hair and makeup people. This beautiful Oscar de la Renta dress, I’m very happy to have also these Cartier jewels. I always feel like Cinderella: come here, do something, see a lot of friends, and go back my blue jeans.”

We can forgive her Globes gaffe and applaud any 72-year-old who uses social media!

Check out her posts below:

Unfiltered in the car going to the SAG awards.

Bobby!!! A wonderful surprise at the Golden Globes.

At theGolden Globes. Such an honor to be in that room with people who have entertained and inspired me for years. A lovely evening.