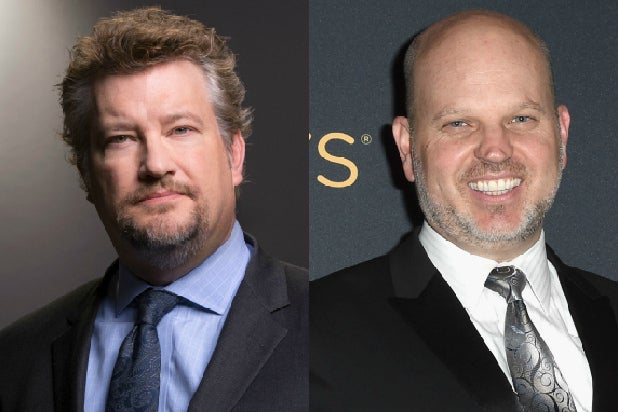 CBS is in talks with Geller (right) for a production deal with CBS Television Studios, according to the network. Geller had been on a leave of absence after suffering a “mild heart attack” in March. Read a memo he sent to staff at the time.

“This is a dynamic, talented and very experienced executive team to lead a division that will create the next generation of hits for CBS,” said CBS president, chairman and CEO Leslie Moonves.

“Kelly has been part of my team since he was an intern at Lorimar 27 years ago,” he continued. “He has a brilliant programming mind, sharp business acumen and great analytical skills for our evolving television audience. He is also highly respected by his colleagues at CBS and our key external stakeholders, and he knows how to make all parts of the network work together to form a winning team.”

“Through our work at The CW, I’ve had a front-row seat to see Thom’s outstanding creative instincts and programming vision in action,” Moonves’ statement went on. “He has developed and nurtured an incredible roster of critically acclaimed, commercially successful and fan favorite shows for The CW and other companies. He also has strong relationships across the community, a deft creative touch and a desire for making shows that create a passionate bond with the audience.”

“We have great respect for Glenn’s many accomplishments and his tireless efforts over 16 years at CBS – both at the Network and our Studio,” the head honcho concluded. “He’s a smart programmer and loves the creative process, and we look forward to working with him in his new role.”

Scheduling chief Kahl is a 21-year CBS veteran, and is tight with Moonves. Sherman has been with CW since 2006, where he helped with the network’s transition to superhero-centric series and quirky dramedies.

Geller succeeded Nina Tassler in CBS Entertainment’s top role in 2015. The executive joined CBS in 2001 as a director, then was promoted to vice president of current programming. He later moved to the studio division as senior vice president.

In 2013, Geller was named executive vice president, overseeing current programming for CBS’ studio, the network and the CW. Geller had previously worked in the drama department at 20th Century Fox Television.

In "Wisdom of the Crowd," Jeremy Piven stars as a tech genius who creates a crowdsourcing app to solve crimes in the wake of his daughter's murder. It'll air Sundays this fall on CBS.
View In Gallery