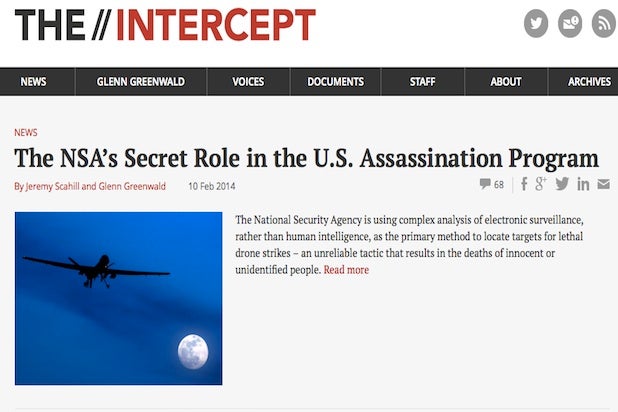 Glenn Greenwald’s new online magazine The Intercept started off with a bang Monday morning, with two new revealing stories about the controversial NSA program that was uncovered by leaker Edward Snowden.

The first post, entitled The NSA’s Secret Role in the U.S. Assassination Program, was written by Greenwald and co-collaborator Jeremy Scahill. “The National Security Agency is using complex analysis of electronic surveillance, rather than human intelligence, as the primary method to locate targets for lethal drone strikes – an unreliable tactic that results in the deaths of innocent or unidentified people,” Greenwald and Scahill explain.

The other, is an article entitled, New Photos of the NSA and Other Top Intelligence Agencies Revealed for First Time and was filed by guest photojournalist Trevor Paglen. The story features never-before-seen aerial images of the NSA. Paglan says the photographs “show three of the largest agencies in the U.S. intelligence community. The scale of their operations was hidden from the public until August 2013, when their classified budget requests were revealed in documents provided by Snowden.”

The introductory post of The Intercept promises “aggressive and independent adversarial journalism across a wide range of issues, from secrecy, criminal and civil justice abuses and civil liberties violations to media conduct, societal inequality and all forms of financial and political corruption.”

The Intercept’s Twitter was also launched Monday, with thousands immediately flocking to see what new revelations the site will uncover.