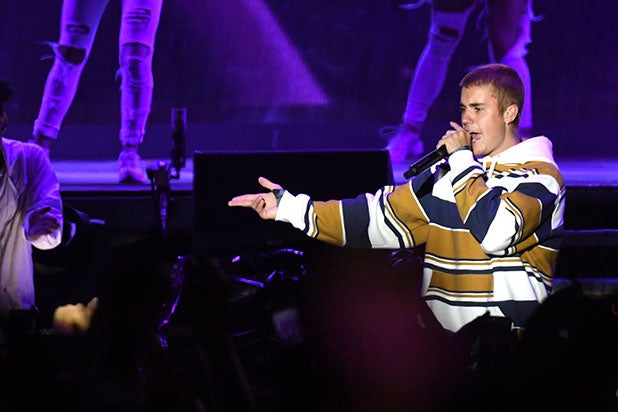 A music rights company representing songs performed by John Lennon, Justin Bieber, Shakira, Drake, and Kenny Chesney, among many others, has filed a lawsuit against the Radio Music License Committee (RMLC) over licensing fees, TheWrap has learned.

Global Music Rights — a new alternative to long-standing music-rights outfits ASCAP and BMI — argues that it has not received nearly enough in compensation for songs performed by its artists on traditional terrestrial radio.

RMLC stations constitute 90 percent of the country’s terrestrial radio revenue, the complaint says, and reach 245 million listeners weekly. Currently, terrestrial music radio stations pay less than 4 percent of their revenues to the songwriters who create that music, per the court filing. (It’s less for news and talk, by the way.)

“The Radio Music License Committee operates an illegal cartel,” according to the complaint, filed Tuesday in the Central District of California. “Its members, including powerful radio broadcasters like CBS Radio and Cumulus Media, as well as Los Angeles-based companies like Mt. Wilson Broadcasting and Point Broadcasting, have agreed with one another and with the RMLC to artificially depress the license fees member stations pay to perform musical compositions on the radio.”

Unlike ASCAP and BMI, GMR is not subject to a consent decree, compulsory license, or rate court that allows for mediation of sorts over fees paid to play their artists’ compositions. Instead, GMR says it pretty much has to take what it can get from giant RMLC — and that hasn’t been nearly enough.

“The RMLC flexed their collective muscle to attempt to force GMR to submit to a mandatory licensing scheme and artificially depressed license fees,” GMR’s attorneys wrote. “Unless GMR succumbs to these monopsonistic demands, GMR songwriters will not have access to the vast majority of terrestrial radio stations, a media outlet that remains crucial for songwriters’ financial and reputational success.”

GMR seeks unspecified actual, treble and punitive damages, plus attorneys fees and costs, as well as injunctive and other reliefs the court deems appropriate.

Here’s what the RMLC said later, in response:
“The RMLC will not roll over in the face of the baseless, bullying lawsuit filed yesterday by Global Music Rights. GMR’s lawsuit is an obvious ploy designed to pressure the RMLC in response to the antitrust suit the RMLC filed against GMR in federal court in Philadelphia last month. GMR now tries to hide from reality: the fight between the RMLC and GMR stems from GMR’s attempt to impose monopoly pricing on the radio industry, and the RMLC’s opposition to that plan. Courts have recognized, for many decades, that without regulation of their rates, performing rights organizations (PROs) like GMR are anticompetitive and violate the antitrust laws. That is why all the other PROs (ASCAP, BMI and SESAC) are subject to rate controls. GMR baselessly criticizes the rates agreed to between the RMLC and the other PROs as unreasonably low, but conveniently ignores that the courts have regularly found them to be reasonable and non-discriminatory. GMR’s claim that the RMLC is a cartel is frivolous and offensive; GMR apparently seeks to force all PROs to negotiate separately with more than 10,000 radio stations — a ridiculously inefficient proposal. The RMLC looks forward to defeating GMR’s claims in court.”