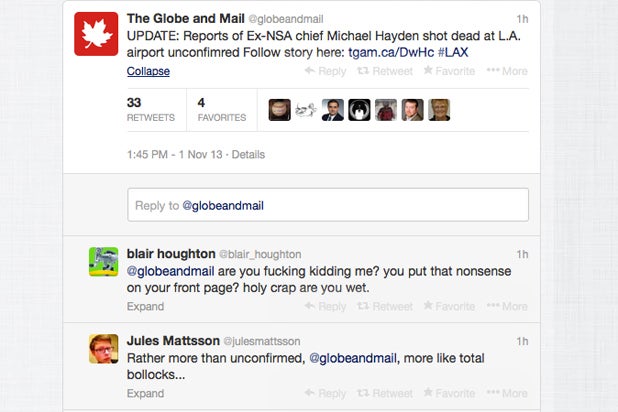 In yet another in a long list of major breaking news errors committed by major news outlets, Canada’s Globe and Mail falsely reported that ex-NSA chief Michael Hayden was killed in Friday’s shooting at the Los Angeles International Airport.

In a report attributed to “Reuters and Associated Press,” Globe and Mail wrote “LAPD is reporting Ex-NSA chief Michael Hayden has been shot dead at LAX. Radical Christian gr0up has claimed responsibility on its website.”

The source of the error appeared to be a tweet from a hoax account, which the Globe repeated almost word for word in its lede. Neither the AP nor Reuters included this in their versions of the story, though it was attributed to the agencies in the byline.

The article was subsequently corrected: “Editor’s Note: In an earlier version of this story, The Globe incorrectly included as fact the hoax that a former NSA chief had been killed.”

The Globe and Mail did not return requests for comment. Gawker was the first to point out the error.

The error is yet another example of how usually reputable news agencies can make major errors when reporting breaking news. In September’s Washington Navy Yards shooting, for instance, both CBS News and NBC News incorrectly reported the name of the suspect. During the manhunt for the Boston marathon bombers in April, CNN and the AP reported that a suspect had been arrested or was in custody two days before Dhzokhar Tsarnaev was found hiding in a boat.

In 2012, Fox News and CNN reported that the health care mandate had been ruled unconstitutional, while, in December, Countless news outlets initially reported that Ryan Lanza was responsible for the Newtown school shooting. The murderer was actually his brother, Adam.