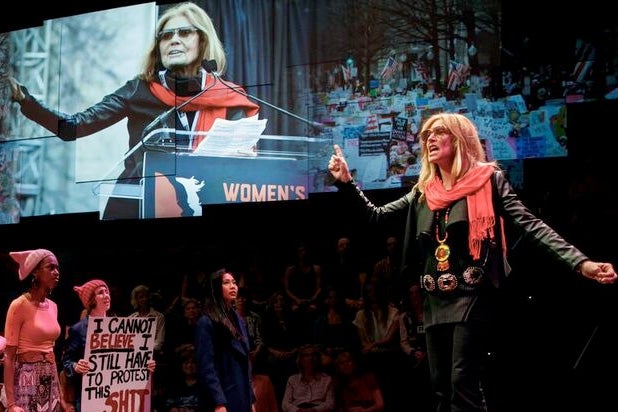 In recent years, post-show talk-backs have become a mainstay of theater — allowing audiences to discuss and debate what they’ve just seen on stage with cast, creators or topic-related experts brought in for just that purpose. But the phenomenon takes a new form in “Gloria: A Life,” a biographical tribute to feminist legend Gloria Steinem that opened Thursday at Off Broadway’s Daryl Roth Theatre.

In this show, the talk-back has been elevated to an actual Act 2, described in the script as “audience discussion in the spirit of a talking circle.” Helpfully, the audience is already seated in the round, in a stadium-like setting with giant pillows.

And at the performance I attended, the discussion was led by a very special guest: Gloria Steinem herself, looking as tall and svelte at 84 as the woman who portrayed her for the previous 100 minutes or so. (“It takes a lot of courage to follow myself,” she joked.)

Emily Mann’s well-crafted play — which is equal parts biography, history lesson, TED talk and call to action — encourages just the sort of cathartic engagement that was on display with audience members. (One said it was her second time seeing the show, another vowed to return with her father and brothers so they could hear from other women the kinds of stories she had tried to share with them.)

And Lahti bears a striking resemblance to the younger Steinem, with her model-like good looks, mop of straight blond hair and a voice that is forceful without ever turning shrill. She’s accompanied on stage by a diverse ensemble of six women who play multiple roles from Steinem’s life and career, from her long-suffering mother to congresswoman Bella Abzug to Coretta Scott King.

Mann’s script covers all the usual biographical bases: Steinem’s undercover article posing as a Playboy bunny, the founding of Ms. magazine, the marriage to Christian Bale’s dad (cut short by his sudden death to brain lymphoma).

But it also serves as a kind of corrective to received history about what was once called the women’s liberation movement, spotlighting the role played by women of color like Flo Kennedy and Wilma Mankiller, on the one hand, and details that might have been relegated to footnotes. (It turns out that no bras were actually burned at the Atlantic City demonstration that gave rise to the term “bra-burners” because “we couldn’t get a fire permit!”)

The show’s real power, though, comes in Steinem’s — and Lahti’s — ability to give voice to the deep-seated feelings of powerlessness and frustration and exploitation that many women feel — and to channel those feelings into meaningful action.

Hers is a plainspoken voice borne of her Midwestern upbringing, and one that manages to make even the most aphoristic statements (“Don’t worry about what you should do, just do whatever you can do“) ring absolutely true. Bromides, it seems, are for bros.