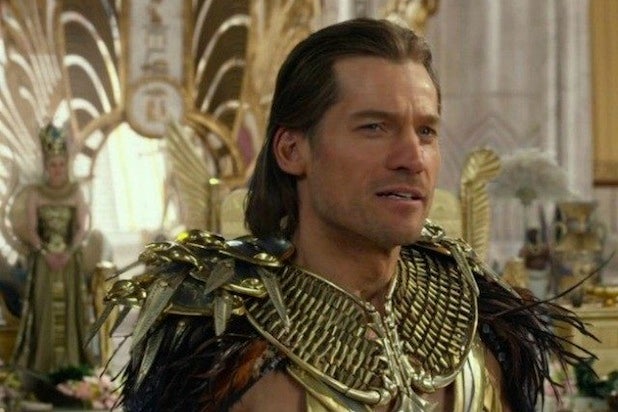 If “Gods Of Egypt” was going for campy charm and so-bad-its-good status, it failed at that — and at many other things, according to critics.

The new fantasy film directed by Alex Proyas and starring Nikolaj Coster-Waldau, Chadwick Boseman, and Gerard Butler has been panned in reviews, sporting an early Rotten Tomatoes score of 19 percent. TheWrap’s Alonso Duralde called it “a mishmash of unconvincing visual effects and clumsy writing,” also noting that it’s another movie about Egypt with white people taking all the major roles.

“Most Pixar movies do a better job of making the eye forget that it’s watching something completely artificial; never for a moment did I stop thinking about post-production processing,” said Duralde of the movie’s effects. “Next to ‘Gods of Egypt,’ ‘Sky Captain and the World of Tomorrow’ is ‘The Revenant.'”

“Gods of Egypt” opens Thursday. Here are some more of the thumbs-down reviews.

“Despite the ostentatiously virtual images and the comic book and borderline science-fiction touches, in its heart ‘Gods of Egypt’ is an adventure in what used to be called the ‘swords and sandals’ genre. Every brawny chest is waxed, every bosom heaving. The characters address crowds of thousands of (digital, alas) extras, and run their enemies through with swords and spears and zap them with death rays (hey, some of them are gods, okay?), and swear fealty to this and vengeance against that, and tromp around in metal tunics while saying things like, ‘Why was I made to walk on burning sands while my brother strolled barefoot alone on the shores of the Nile?'”

“With its burnt-yellow cinematography, its excessively gilded production design and its blinding flashes of sunlight, ‘Gods of Egypt’ at times doesn’t suggest a movie so much as a giant cinematic tanning salon — all the better, perhaps, to darken the pearlescent skin tones of most of the actors on display (an effect that can be further enhanced with your purchase of murk-maximizing 3D glasses).”

“The only dark-skinned god is a prancing poser who seems to be auditioning for ‘RuPaul’s Drag Race.’ At least he’s livelier than the rest of the cast. But it’s not easy to act naturally when you’re surrounded by the most excessive yet unimpressive special effects in years. Director Alex Proyas‘ movie feels like a bad video game.”

“As Thoth, the lord of wisdom, Chadwick Boseman brings a light, audience-tickling tone of comic vanity, especially when he spends a minute trying to describe intellectually the unique properties of lettuce. Regrettably, director Alex Proyas, the ambitious creator of ‘The Crow’ and ‘Dark City,’ spends most of his time and ours focusing on pseudo-epic scenes that feel like leftovers from a medium-budget animé.”

“The idea of making the gods twice as tall as people allows for some amusing visual touches and also makes it easy to track, at all times, who is a god and who is not. But very soon, this hardly matters. Very soon — remarkably soon, almost before you can blink an increasingly heavy eyelid — the movie becomes tiresome, and then worse than that. ‘Gods of Egypt’ induces a weird stupor, a feeling akin to just coming out from anesthesia. I spent half the film expecting my doctor to come in and tell me how the colonoscopy went.”