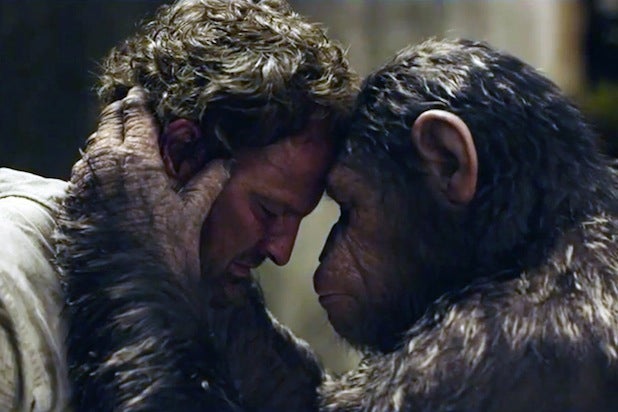 “Godzilla” stormed into Japan at No. 1 and closed in on two major milestones, but “Dawn of the Planet of the Apes” was the top film at the international box office this weekend.

The Fox sci-fi sequel brought in $54.4 million from 60 foreign markets, raising its international total to more than $183 million and its worldwide haul to $355 million. The film opens next week in 11 more markets, including France, Italy and Belgium.

“Apes” opened at No. 1 to a very strong $13 million in Mexico and with $9.3 million in Brazil, more than double the debut of “Transformers: Age of Extinction.”

“Godzilla,” from Legendary Pictures and Warner Bros., brought in $6.9 million from 427 theaters to top the box office in Japan, where original rights holder Toho Company is distributing.

That puts the rampaging reptile remake just shy of $300 million internationally and poised to cross the $500 million mark at the worldwide box office on Monday.

Paramount’s “Transformers: Age Of Extinction” continued to bear down on $1 billion at the worldwide box office. It added $37.5 million from 60 countries to up its international total to $730 million and its global haul to $966 million. It recently passed $300 million in China, well ahead of its $236 million domestic gross.

The studio’s “Hercules” debuted in 26 foreign markets and brought in $28.7 million. Russia delivered the biggest opening yet for a movie starring Dwayne Johnson with $12 million.

The Fox-distributed DreamWorks Animation family film “How to Train Your Dragon 2” added another $24 million from 43 markets. That ups its foreign total to $260 million and its worldwide take to $425 million.

Universal’s low-budget horror sequel “The Purge: Anarchy” brought in $6 million from 23 overseas markets this weekend and is pacing ahead of “The Purge,” which totaled $27 million from abroad.