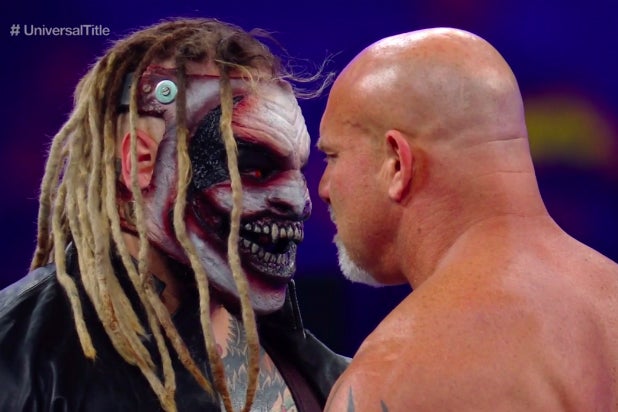 Yes, say goodbye to that unbeaten streak and the immortal aura assigned to Wyatt’s demonic alter-ego. The push was nice while it lasted.

Goldberg’s shocking win, which required roughly three minutes of in-ring work, took four spears and one (kinda-sorta) jackhammer to get the job done. Along the way, the “Longest Yard” actor fought out of a pair of mandible claws, which is one of The Fiend’s finishing maneuvers. Bill Goldberg didn’t eat a Sister Abigail, for what that’s worth.

Evidently, viewers are supposed to accept that Goldberg’s brief offense was significantly more potent than all the actual tools Seth Rollins hit The Fiend with last fall at another WWE pay-per-view, “Hell in a Cell.” Oh yeah, and Rollins also hit his challenger with 10 — yes, 10 — curb stomps during that much longer match.

Rollins dropped the title to Wyatt that evening, and Twitter freaked out about the way WWE seemed to bury the face of “Monday Night Raw.”

Today was no different, at least in terms of the social media response. The victor certainly was different, and now fans are losing their minds over his apparent burial.

Pretty much as soon as Goldberg was given the blue belt by a WWE official, The Fiend popped back up to his feet. Then the lights cut out and he was gone (under the ring, a common disappearing-act trick).

Too little, too late. All of that build-up, including the production time and money dedicated to Wyatt’s “Firefly Funhouse,” a favorite segment among fans, seemed to go away today during the middle east main event.

Watch the Goldberg win play out in spears via the videos below.

Goldberg, who has guest-starred on both “The Goldbergs” and its spinoff “Schooled,” is now the champion of Fox’s “Friday Night SmackDown.” The weekly professional wrestling show will air live tomorrow night from Boston starting at 8/7c.

Putting the belt on the 53-year-old part-time wrestler did not go over well with the WWE Universe on its platform of choice, Twitter.

Below is a mere sample of the backlash — there are plenty more where these 10 came from. (And plenty of those have plenty of expletives, which we try to avoid where possible.)

53 years old. I get that nostalgia sells, but if WWE don't start building stars now then in twenty years time they won't have any nostalgia left to sell. #WWESSD pic.twitter.com/0aSqeuOj1p

They buried what was the hottest thing in wrestling to put it on a part-time old man who can’t physically compete for more than 5 mins. What a joke. This company is obsessed with Brock and Goldberg idk why. The fiend was literally unbeatable this whole time #WWESSD pic.twitter.com/cgG86UQI0z

Me to @VinceMcMahon for having 53 year old Goldberg beat the Fiend in 3 minutes #WWESSD pic.twitter.com/on5bBNhUbD

#WWE now has 2 part time World Champions. As Goldberg celebrates, Corey Graves says “this isn’t a part time job, I expect to see him tomorrow.” The WWE is a massive joke & killed the single best thing they had going. They have become WCW 2000 & some say, they have been. #WWESSD pic.twitter.com/r2nsPecxWC

They really had GOLDBERG beat The Fiend…..