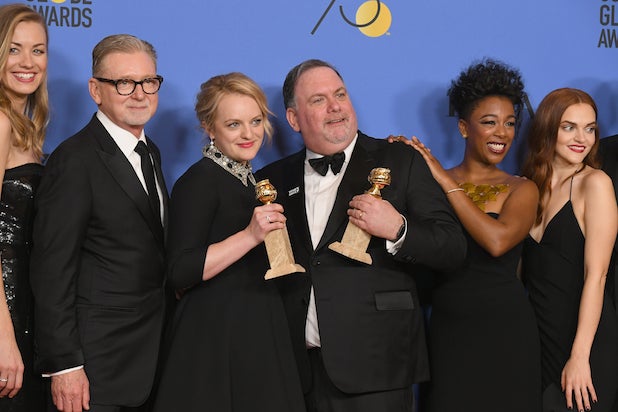 With dozens of #MeToo moments and an Oprah Winfrey speech that brought Hollywood to its feet, the 2018 Golden Globes provided plenty of made-for-television moments. But we caught a few you didn’t see onstage or onscreen.

A lot happened during the commercial breaks, from celebs live-streaming their own star-struck moments to some of the night’s biggest winners partying hard. Here are the five best things you didn’t see on TV.

While people swarmed the bar for cocktails and champagne, “American Horror Story” star Sarah Paulson casually talked to fans online. “There’s Michael Keaton,” she said as she live-streamed Instagram on her phone in the off-camera lounge.

Ewan McGregor bit off more than he could chew — literally. Halfway through his backstage interview after winning for Best Actor in a Limited Series or Motion Picture Made for Television for his work in “Fargo,” it wasn’t that McGregor couldn’t find the words; he genuinely couldn’t speak.

“I took this huge mint,” he told the crowd. “I’m stuck with this big f—ing mint.”

The filmmakers behind Disney Pixar’s “Coco” got an uncomfortable question backstage — “How has work been in wake of division head John Lasseter’s self-imposed leave of absence last year over misconduct?”

“We want to focus on being in solidarity with tonight’s movement,” producer Darla K. Anderson said, referring to the #TIMESUP movement.

“We have been taking steps and will continue to make roads making it an even better place for people to create art,” director Lee Unkrich added.

That would be the stars of “The Handmaid’s Tale.” After the massive group led by Elizabeth Moss (who won a Globe for Best Actress in a Television Series – Drama), Ann Dowd and Samira Wiley finished with the car wash of press backstage, they disappeared behind a production curtain and erupted into screams of joy, celebrating their win for Best TV Series – Drama.

“The Handmaid’s Tale” showrunner Bruce Miller was reminded that Amazon passed on his adaptation of Margaret Atwood’s seminal book. One reporter wondered if there was schadenfreude over the current sexual harassment scandals that has rocked Jeff Bezos’ content studio.

Miller simply said it was none of his business.