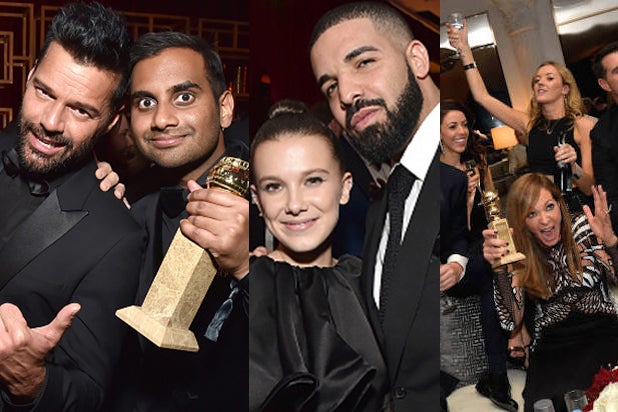 Kevin Mazur/Netflix (2), Getty Images
After 'Three Billboards Outside Ebbing, Missouri" walked off with the top film prize to end the show, parties broke out in every corner of the Beverly Hilton and neighboring Waldorf Astoria. Ricky Martin, Drake, and Mariah Carey joined the winners. 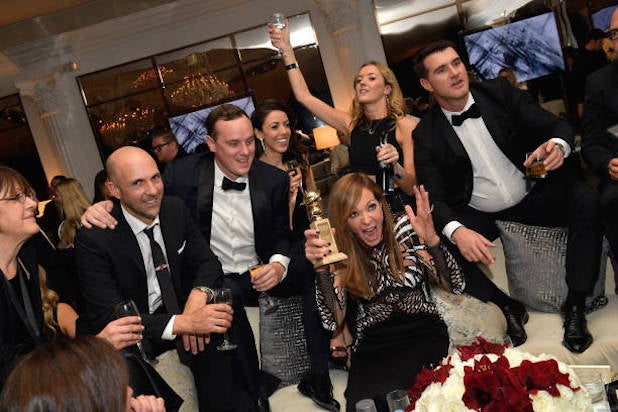 Matt Winkelmeyer/Getty Images for InStyle
Allison Janney and her entourage went wild over her win for "I, Tonya" at Warner Bros. and InStyle's thumping bash. From the moment DJ Michelle Pesce dropped Blondie's "Rapture" to begin the night, the converted Oasis Courtyard had a pulse. 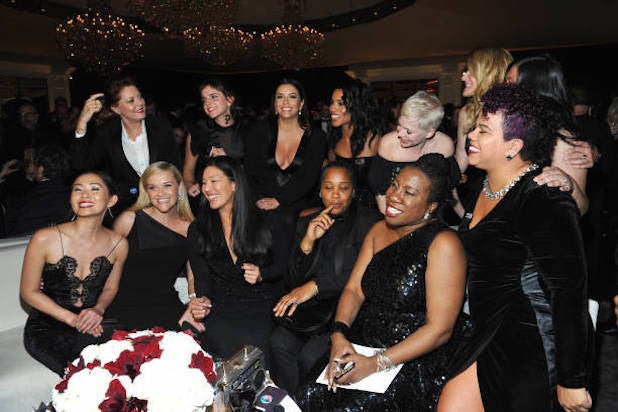 Rachel Murray/Getty Images for Hulu
At Hulu's party with Fox and FX, the three "Handmaid's Tale" women whose characters live in Commander Waterford's house --  Elisabeth Moss, Amanda Brugel, and Yvonne Strahovski -- create a scene that would never fly in Gilead.

Neilson Barnard/NBC
Justin Timberlake is the next big thing coming to NBC. Exactly four weeks after the show, he'll be performing at the Super Bowl Halftime Show. At the network's party on Sunday night, he celebrated with victor Sterling K. Brown.

Mikey Glazer
The view from one rooftop party at the Beverly Hilton looking out towards another.  HBO celebrated downstairs over the pool while Fox/FX/Hulu created a space on top of the parking garage.

Donato Sardella/Getty Images
Back at InStyle and Warner Bros.' soiree, Ashley Judd, Mariah Carey and Leslie Bibb shielded Sam Rockwell and his supporting-actor trophy for "Three Billboards." Later in the night, Judd and Salma Hayek would roll in to the HBO party together.

Michael Kovac/Getty Images
Saoirse Ronan and James Franco toasted with the wrong gold item in this picture.  These are two thirsty winners in search of a champagne glass.

Kevin Mazur/Netflix
At Fox and FX's party on the Beverly Hilton rooftop, Angelina Jolie poses with Ewan McGregor. Between McGregor's win for "Fargo," and two wins for "The Handmaid's Tale," it was a successful night for Gary Barber and MGM Television.

Getty Images
Natalie Portman, America Ferrera, and Eva Longoria anchored a choice banquette in the back corner of InStyle's bash, with Gayle King and Lena Waithe as their table neighbors.

Mikey Glazer
Mark Ronson (pictured) and sister Samantha both performed at Amazon's bash.  It was slightly surreal to see Mark spin some of the songs he wrote, like "Uptown Funk," a catalogue hit that looks like it's never going away.

Kevin Mazur/Netflix
Drake has Denzel Washington, Sade, Lil Wayne, and his father tattooed on his body. Alfre Woodard may be getting close to ink status. For now, Drizzy genuflected in her presence.

Getty Images
Tommy Wiseau, the real life "Disaster Artist," had guests at InStyle shouting "Tommy! Tommy!" as he entered the room. He didn't make it far without stopping for photos, including this one with Seth Rogen and the filmmakers.

Rachel Murray/Getty Images for Hulu
As they did on Emmy night back in September, the creative ensemble behind "The Handmaid's Tale" had a lot to celebrate. From the left: Alexis Bledel, Yvonne Strahovski, Hulu SVP/Head of Content Craig Erwich, Moss, Madeline Brewer and Amanda Brugel.

Kevin Mazur/Netflix
Aziz Ansari provided the lone win for Netflix, but you would never have known that from their party. Here, Edgar Ramirez and Ricky Martin (who has his own FX premiere for "The Assassination of Gianni Versace" on Monday night) join the creator/actor at the bash.

Todd Williamson / January Images
Recently engaged Paris Hilton and Chris Zylka put it all on display for photographer Todd Williamson.  These two were amongst those who rode the elevators up to Amazon's party in the penthouse without incident. One of the elevators broke, briefly trapping some guests for about five minutes, according to a Beverly Hills Police Officer on scene who spoke with The Party Report.

Todd Williamson / January Images
Hailing from different wings of the ABC network, "Bachelor in Paradise's" Wells Adams and "Modern Family's" Sarah Hyland are going strong as a couple. They hit Amazon's party along with Tyrese Gibson and Nicole Scherzinger. "Scherzy" recently wrapped a buzzy season of "The X Factor UK" which launched a group to the top of the charts.

Getty Images
For more from inside and backstage the Golden Globes party scene, click over to our gallery of the starry pre-show scene across L.A. Also Read: Golden Globes Weekend Party Scene: A-Listers, ‘Times Up’ T-Shirts Hit the Red Carpet (Photos)

Sansho Scott/BFA.com
Hot off his success hosting the Globes (and with his pregnant wife Alexi Ashe somehow still standing), Seth Meyers attended his own official after-party at  The h.wood Group’s Poppy nightclub in West Hollywood,  presented by Beats By Dre and Perrier-Jouet.

Sansho Scott/BFA.com
Former "Mad Men" maven Christina Hendricks may soon be back on the awards watch list with her new NBC sitcom "Good Girls," but on Sunday, she was just enjoying the party at Poppy.

Photographer: Sansho Scott/BFA.com
"This Is Us" actor Justin Hartley and his wife Chrishell Stause were among the guests at the h.wood Group’s celeb-filled bash. While "This Is Us" is a fan favorite, Hartley played fanboy over one of his idols, Mariah Carey.