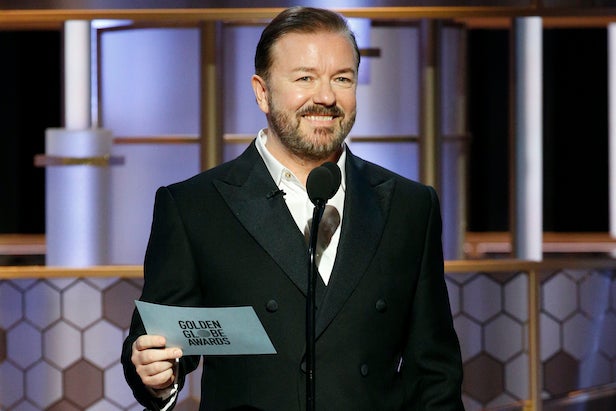 The 77th Golden Globes, hosted by Ricky Gervais, appear to be down 15% in ratings from last year, according to very preliminary Nielsen numbers.

It is very important to stress here that the below numbers for NBC are subject to significant upward adjustment. We’ll get more reliable data in a matter of hours.

For the time being, we’ve compared last year’s non-final fast affiliate ratings with the ones we received this morning. So the totals are understated and imperfect, but the comparison is apples to apples.

The all-in audience tally is down 6%, for now.

One thing that did not help the 2020 effort is a longer delay between the final whistle of NBC’s NFL playoff game, the lead-in to the Golden Globes for the past two years, this time around.

NBC was first in ratings with a 4.9 rating/22 share in the advertiser-coveted 18-49 demographic and in total viewers with an average of 18.5 million, according to preliminary numbers. Again, those numbers will only rise. Last year, the Globes jumped about 18% from such fast-affiliate numbers to official ones.

NBC’s NFL game and postgame discussion drew an 8.3/35 and 29.7 million viewers in the 7 p.m. ET hour. Those numbers should also be considered very preliminary and subject to significant adjustment.

CBS and Fox tied for third in ratings, both with a 0.5/2. CBS was second in total viewers with 5.6 million, Fox was fourth with 1.5 million.