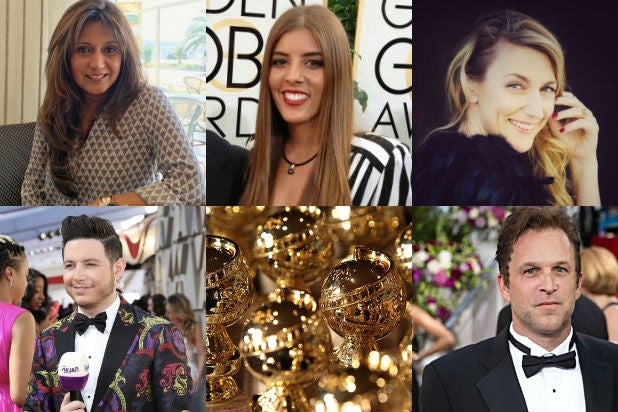 The Hollywood Foreign Press Association, the 88-member nonprofit group that hands out the annual Golden Globes Awards, this month rejected all five applicants for new membership, according to a tally of the May 6 vote obtained by TheWrap.

Moreover, two journalists in the group accused fellow members of “bullying” tactics and an “unjustifiable campaign” against one applicant, Kjersti Flaa, who has represented Norwegian outlets like TV2 and Dagbladet for 12 years, according to internal HFPA documents.

The other rejected applicants all had professional experience that met the HFPA criteria: Raffi Boghosian, a journalist from the United Arab Emirates who worked for Al-Arabiya for eight years; Sabrina Joshi, who has written for the Indian weekly You & I since 2017; Sophia Silva, a four-year veteran of Uruguay’s “El Pais — Sabado Show;” and Christian Thiele, who has worked for the Swiss magazine TV Star for eight years.

“This behavior is just outrageous,” one HFPA insider told TheWrap, adding that roughly 40 percent of current members are over 65 — and at least five are in their 90s. “At the same time as this organization is growing, it’s getting smaller — the membership is getting smaller and it’s becoming an elite where they don’t want any new members for some reason.”

The group admitted just one member out of three applicants last year, and a single new member in 2017. But a spokesperson for the group said that a total of 17 new members had been accepted in the last decade, including four in 2016.

“The results of this year’s membership vote came as a surprise,” the HFPA said in a statement to TheWrap. “The HFPA is committed to updating its admissions process and to bringing in new members for the long-term health of the association.”

Documents from this year’s application process suggest bitter dissension has cropped up among members. In a sponsor letter for Flaa obtained by TheWrap, fellow Scandinavian journalist and HFPA member Magnus Sundholm said that he stepped up after “her original sponsor, a hard news reporter and former war correspondent, was so pressured by some female members in the organization that he saw no other option but to step down.”

He also wrote that one of Flaa’s sponsors for membership last year was “harassed in text messages and called all sorts of nasty things by the same members.” Although his letter does not name any of the members he accuses of pressure tactics, he wrote, “Our Danish member has yet to come up with an honest explanation for her continuous aggressive campaign against (Flaa).”

Tina Johnk Christensen, the HFPA’s sole Danish member, has not responded to TheWrap’s request for comment.

In a second sponsor letter for Flaa this year, French-Belgian journalist Frank Rousseau wrote: “It is important for me to highlight that Kjersti applied for a membership last year where she experienced an unjustifiable campaign against her … as well as fabricated stories, to make people vote against her.” Rousseau did not respond to TheWrap’s request for comment.

In his sponsor letter, Sundholm, who has a personal relationship with Flaa, begged members to have “enough integrity and stamina to honor what’s best for the growth of this organization — and not listen to a few females who is [sic] viciously determined to put down other women.”

He added, “What has Kjersti done to trigger this kind of bullying?”

Flaa ultimately received 35 votes of support, with 45 opposed, according to the vote tally. Flaa and Sundholm both declined to comment, as did Silva and Boghosian. Joshi did not respond to requests for comment.

The HFPA had no comment on the machinations behind this year’s vote beyond its initial statement to update its admissions process.

It’s unclear why the organization would want to keep a lid on its membership at a time when when the Academy of Motion Picture Arts and Sciences has made a concerted effort to make the Oscar-voting membership younger and more diverse. HFPA members don’t earn a share of the reported $21 million annual licensing fee that NBC pays for the Globes broadcast, a chunk of which goes to educational and arts charities. The group handed out $3.25 million in grants last year.

But members do get special access to Hollywood talent, particularly in its 400-plus special screenings and talent-studded press conferences. “The truth is, you get access to talent and interviews that no one else gets, which is why people want in,” the insider said. “But it seems like they don’t want to let anyone in — it’s become a social club for the older people.”

AMPAS, which has about 8,000 voting members for the Academy Awards, has made a big push in recent years to bring in newer and younger members (last year, the Academy invited 928 new members, including Dave Chappelle, Mindy Kaling, Amy Schumer, Gina Rodriguez and Kendrick Lamar).

HFPA president Meher Tatna, who earns an $81,000 annual salary from the group, has said she also wants to bring in new and younger members. “We try every year,” Tatna told The Hollywood Reporter last August. “They have to be accredited, have really good clippings, have two sponsors bringing them in. And we try to spread it out all over the world. But print media is shrinking and it’s hard to find people who can make a living at this.”

All five of this year’s applicants met the group’s basic criteria, which include two support letters from existing HFPA members, four clippings of their work from the last year and proof of membership in the Motion Picture Association of America. The deadline to vote this year was May 6, and the results were announced to members at a meeting on May 8.

This isn’t the first time membership processes within the HFPA have been called into question.

In 2015, TheWrap reported that the organization suspended Russian member Nellee Holmes after she was accused of attempting to extort tickets and a non-compete pledge from an applicant. The organization found that Holmes had demanded that Ukrainian journalist Lena Basse promise in writing not to write stories for a number of outlets, most of them Russian, in exchange for Holmes’ support for Basse’s admission.

When Holmes insisted that Basse deliver a notarized letter making the same guarantees, Basse instead turned Holmes’ demands over to the HFPA office, where then-president Theo Kingma initiated disciplinary action against Holmes that barred her from participating in the following year’s Golden Globes.