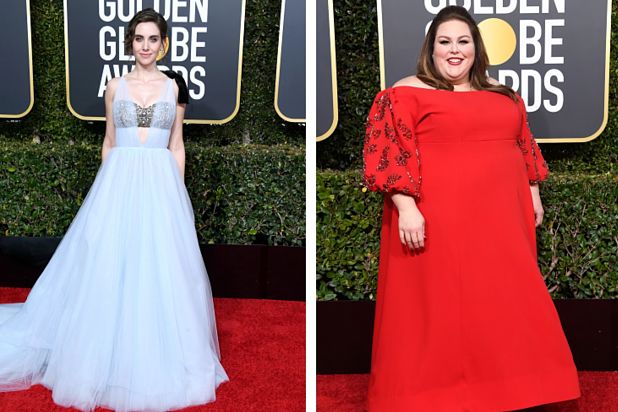 “This Is Us” star Chrissy Metz did use a “B” word to describe Alison Brie at the Golden Globes on Sunday, but it may not have been the one that many viewers, and quite a few media outlets, initially thought. In fact, it was a much nicer one.

According to AJ Gibson, one of the co-hosts of the red carpet pre-show on Facebook Live, Metz called the “Glow” star a “babe.”

“While interviewing Chrissy during the HFPA Presents: Globes Red Carpet LIVE pre-show and as our conversation came to its natural conclusion, we were told to wrap and toss over to our co-hosts on another portion of the carpet, who were on standby with Alison Brie,” Gibson told People. “I jokingly asked Chrissy if she knew who Alison was, as a way to transition into the ‘toss’ and she played along. She then referred to Alison as a ‘babe’ and the fun exchange ended.”

Let’s focus on pouring love into each other in 2019. The TRUTH is always far more powerful.

During the Golden Globes pre-show Sunday on Facebook Live, the “This Is Us” actress was asked by the co-hosts about Brie. Metz said only nice things, but after the camera switched to a view of the carpet, many viewers thought it sounded like Metz said, “She’s such a bitch.” Metz vehemently denied saying so.

Multiple outlets, including TheWrap, initially reported that was what the actress said. However, Metz was adamant. “It’s terribly unfortunate anyone would think much less run a story that was completely fabricated! I adore Alison and would never say a bad word about her, or anyone! I sure hope she knows my heart,” Metz said on Twitter Sunday night.

According to Vanity Fair reporter Nicole Sperling, Brie was bewildered by the whole thing.

“But why?” Sperling quoted Brie as saying. “I know her. I saw her on the carpet and I told her how beautiful she looked.”