Over classic British nibbles such as Welsh rarebit, Cheddar cheese and chutney brioche, cucumber sandwiches and scones, pairings from TV (“Downton Abbey,” “Transparent,” “Outlander” and “Game of Thrones”) mixed with a slew of the nominated movie directors and forthcoming Oscar contenders. 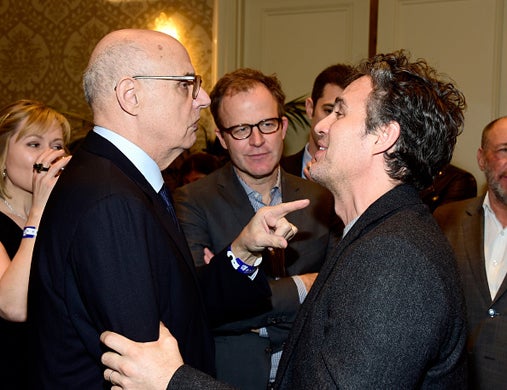 Jeffrey Tambor, “Spotlight” director Tom McCarthy and Mark Ruffalo get to the bottom of it.  (Frazer Harrison/BAFTA LA/Getty Images for BAFTA LA)

2:49 p.m.
Harvey Weinstein (in an all-black suit) is making a bee-line for Mark Ruffalo, who’s sporting a blazer over a gray sweater. In another room, a publicist cuts the drink line in the front of the room. “I’m so sorry to cut. It’s not for me. Can I please have some water?” 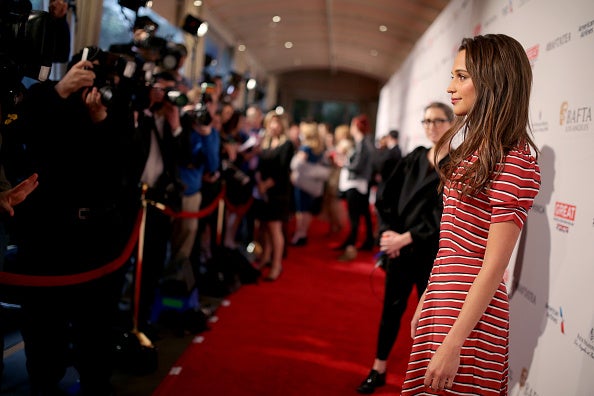 3:10 p.m.
Saoirse Ronan is solo walking through the room in a coral hued dress, holding a tea cup. It is an “Awards Tea” after all. She walks past “The Revenant” youngster Will Poulter, who is jockeying a teapot in a burgundy suit. In case of an awards speech, voice preservation and maintenance is essential. 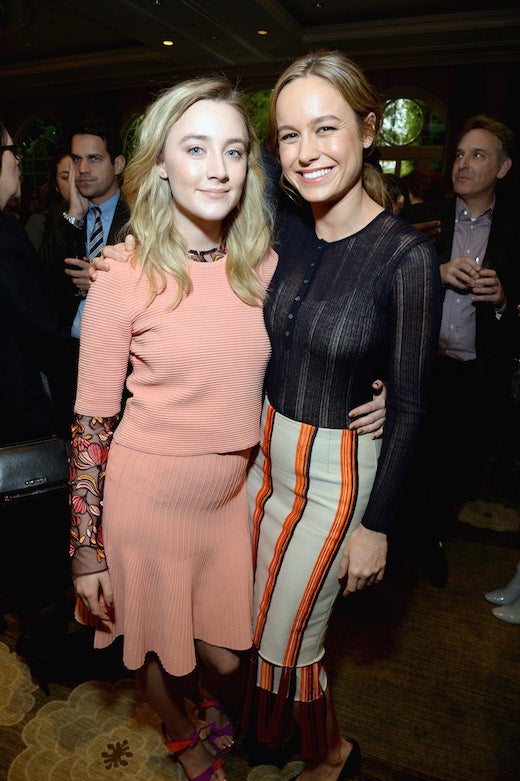 3:21 p.m.
Now, Saoirse has found her awards-season soulmate. She and Brie Larson are deep in animated 1-on-1 conversation in the middle of the room. A huddle forms around them to watch and photographers angle for shots. If people were so inclined, they could grab food off the table nearby. 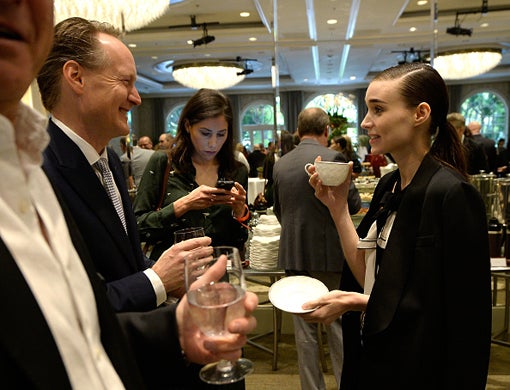 Rooney Mara gets in to the spirit. (Kevork Djansezian/BAFTA LA/Getty Images for BAFTA LA)

3:29 p.m.
Prolific songwriter Diane Warren is here. She’s always here. What does she think about Guns N’ Roses getting back together at Coachella after a 22-year hiatus? If they opened with “Welcome to the Jungle,” Warren says, “It would almost make me want to go.” She’s worked with Slash before. He played guitar on one of her songs, and Warren thinks he’s “a good guy.” Will they be ready in time? They have to rehearse, she says. Warren has a potential Oscar-nominated song with Lady Gaga, “Til It Happens to You.” 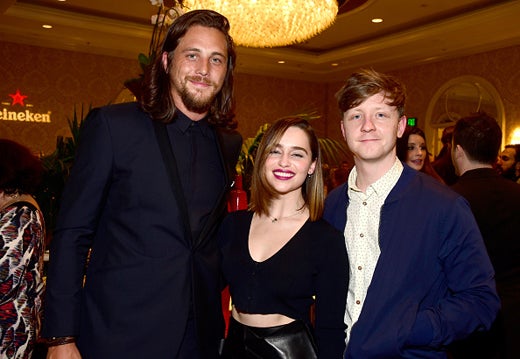 3:40 p.m.
Jeffrey Tambor is fearless in strolling the party solo. Whatever ice or cocktail he had in his hand, it’s all melted. It looks like limp lemon-lime Gatorade at this point. 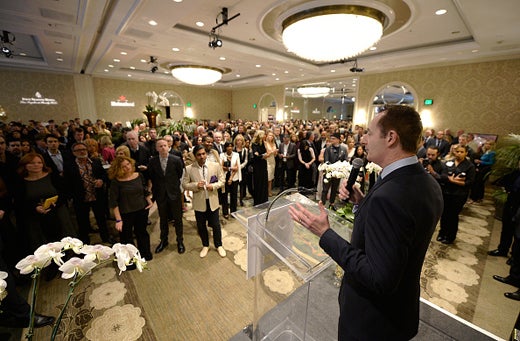 3:45 p.m.
BAFTA L.A. President Kieran Breen addresses the crowd. He tells them that the BAFTA awards in London are coming on Valentine’s Day, Sunday, Feb. 14. That’s “Grammys Weekend” to the Yanks in the ballroom. “It’s me, you, and 2,000 complete strangers having a one night stand,” he says. 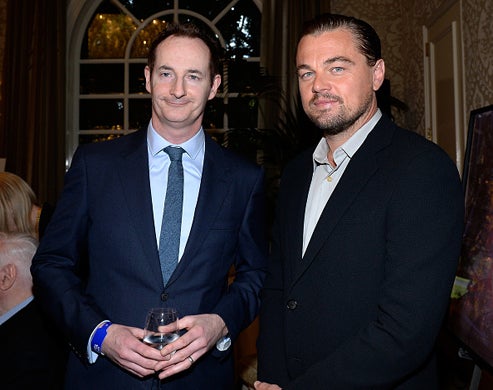 Leo is a regular at the BAFTA Tea.  (Kevork Djansezian/BAFTA LA/Getty Images for BAFTA LA)

4:17 p.m.
Leonardo DiCaprio is here now. He’s in the southwest corner of the ballroom tucked in with Fox chief Jim Gianopulos. It’s as if someone tilted the whole room toward him. Official event photographers have already been told “no photos” but one suicidally ambitious female guest has already inched in next to him for a personal photo, despite placards at the door stating that the ballroom is a “Selfie Free Zone.” 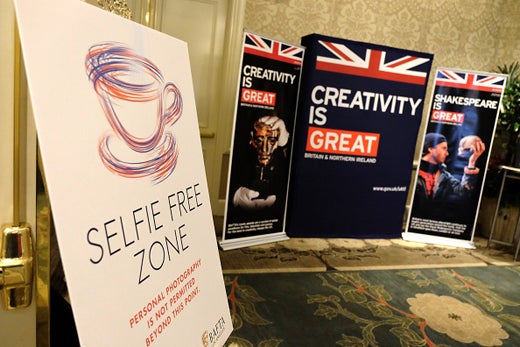 DiCaprio’s “Revenant” beard is gone. He does have a goatee. He’s vaping on what appears to be an e-cigarette pen. He will leave through the back door. 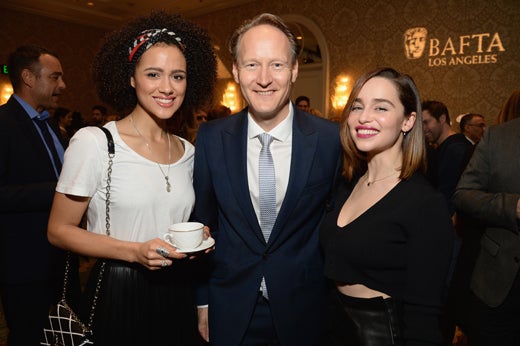 4:21 p.m.
British Consul General Chris O’Connor is chatting with “Game of Thrones” star Emilia Clarke in the opposite corner from the Leo-tilt. Topher Grace is there too, in a circle with three women. 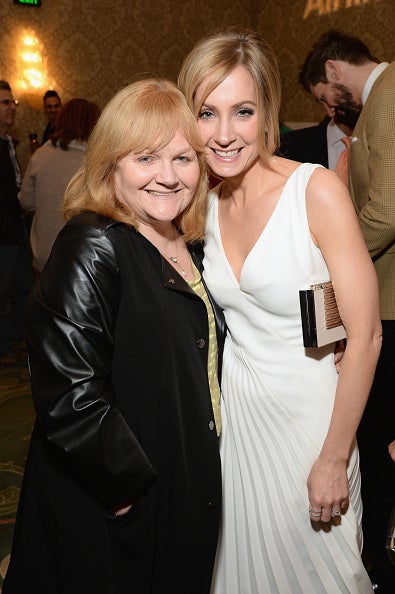 4:55 p.m.
Joanne Froggatt (Lady’s maid Anna on “Downton Abbey”) greets Lesley Nicol (“Downton” chef Mrs. Patmore). It seems like the two have not seen each other in a while since “Downton” wrapped its final season several months ago. “We were in the same vicinity,” Froggatt shouts while ejecting herself from one circle to reach Nicol. Later, Nicol tells me that she recently passed her California driving test, both written and practical. It’s kind of crazy to think that Mrs. Patmore lives in the Valley.

4:48 p.m.
Where’s Eddie Redmayne? A fixture on last year’s awards scene, he’s been M.I.A. this week. Word is that he will arrive in L.A. on the day of the Globes just in time to go right to the show.

5:20 p.m.
The BAFTA bash is over and people are defaulting back to the Four Seasons bar, where the Steelers vs. Bengals NFL playoff game is on. Groups are largely ignoring the hotel’s pleas that a group of tables are “reserved for NBC,” whatever that means. Nicole Murphy is in the corner table with one friend as “Twilight” director Catherine Hardwicke is at another table with two friends. 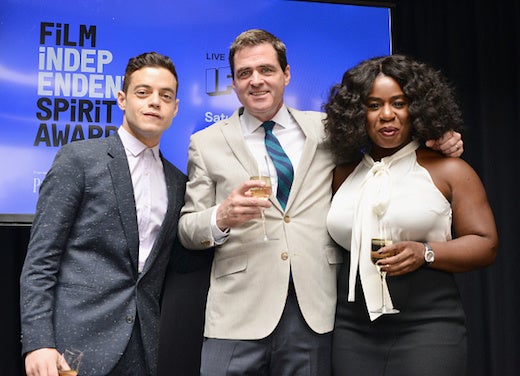 Earlier in the day at BOA, “Mr. Robot” teamed up with “Crazy Eyes” as Rami Malek and Uzo Aduba led Film Independent’s celebration of their nominees for the upcoming spirit awards.

“Not a single person who got up on stage [at last year’s Spirit Awards] pulled out a piece of paper with a long list of thank you’s,” Film Independent President Josh Welsh told the crowd. “And it was fantastic.”

According to Welsh, the agenda for Saturday morning’s brunch was to “eat, to drink, have a good time, and to give away $75,000 in cash to some extremely talented and deserving filmmakers.” Check. Check. Check. Check.