If you love luxury goods and product placement, the Golden Globes has a press release for you.

The Globes, you see, have announced that they’ve created “a world-class Presenters Lounge” for their 67th awards ceremony Sunday night. It’s designed by Kenneth Bordewick and stocked with $800,000 in Lalique and Moura Starr furnishings, and $1 million in art from the Frederick R. Weisman Art Foundation and the Yehoshua Kovarsky Family Trust, among other fancy and expensive things.

Plus, the stars who hang out in what used to more prosaically be called the green room will get to “nibble on culinary delights” and drink Moet & Chandon champagne and Smartwater beverages. Smartwater, it says here, is “the official water of the 67th Annual Golden Globes.” 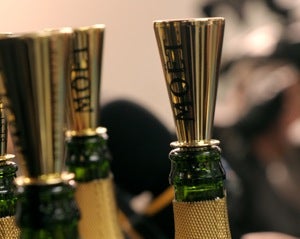 What the press release doesn’t say is that this newly expanded Presenters Lounge, no doubt inspired by the Oscars’ “Architectural Digest Green Room,” has complicated matters for the crew and actually forced the hiring of an additional stage manager.

Here’s what I hear: at the Globes, the green room has long been located just off the stage in the Beverly Hilton’s International Ballroom, in a convenient location that allowed star presenters to be quickly located and moved into position.

But that location wasn’t big or grand enough for a green room worthy of its own press release. Hence the Presenters Lounge, which is actually located in two hotel rooms a short distance away from the ballroom.

For the crew, the problems are twofold. First, the Presenters Lounge displaces what staffers in past years had dubbed “the Elizabeth Taylor Room,” where stars who didn’t want to be seen could keep out of sight until it was time for them to come onstage.

More than half a dozen of Sunday night’s participants are reportedly planning to avoid the red carpet, come in the back way and stay hidden … but now the Globes crew has to find somewhere else to put them.

The other problem is that the new green room is significantly further away from the stage than the old one was, making the trip to fetch upcoming presenters longer and trickier. Already, one additional stage manager has been hired so that the crew already in place won’t waste time going to and from the lounge.

But hey, none of that will concern the beautiful people as they bask in the room’s splendor, sip their Moet and Chandon and drink their Smartwater, the official water of the Golden Globes.

The Golden Globes’ host, of course, will be Ricky Gervais, who has famously said that he plans not to rehearse for the show. I looked into that claim, and found that it’s probably true: as of Thursday afternoon, there was no time on the production schedule set aside for Gervais to rehearse.

Then again, he may not need to. “In the rundown I have,” said one staffer, “he really doesn’t have very much to do.”

The show will be broadcast live on NBC at 8 pm Eastern time, 5 p.m. Pacific.

If you’re watching at home, I suggest you stock up on Smartwater.

Because, you know, it’s the official water of the Golden Globes.