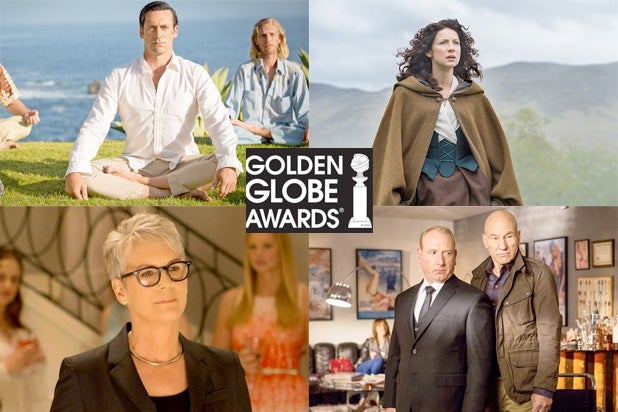 When Gina Rodriguez won best actress in a comedy series at the Golden Globes last year, it felt like a big damn deal. Her freshman CW series, “Jane the Virgin,” was critically adored but had drawn the sort of ratings that put shows on the cancellation bubble.

Rodriguez’s Globe win was the first ever in any category for the CW, and her moving acceptance speech was one of the show’s non-Tina Fey-Amy Poehler highlights. Press speculation about whether “Jane” would be renewed effectively evaporated.

The Globes, with their small, enigmatic voting pool, are good for such surprises — and thus near-impossible to predict. The Hollywood Foreign Press Association boasts fewer than 100 members. They tend to like ingenues, big stars and international talent. But most of all, they tend to like defying expectations.

Predicting Globes winners is thus a task with a high potential for failure. Nevertheless, here’s what we think will and should go down at the Beverly Hilton Wednesday night.

Who Will Win: The nomination for “Narcos” was a slight surprise — until you consider the show’s bilingual nature and the HFPA’s international makeup. Go far enough down that rabbit hole, and it’s easy to envision a massive swell of support for a show that switches between English and Spanish, shoots in Colombia, and happens to be incredibly well crafted.

Who Should: In a field dominated by period and genre pieces, “Mr. Robot” stands out as the one show that attempts to tackle life in the paranoid 21st century head on. It’s also might be the weirdest new thing on television — in a good way.

Also Read: 5 Petitions Not Doing As Well as the One for 'Making a Murderer'

Who Will and Should Win: The nomination for “Mozart in the Jungle” — a show completely devoid of buzz — was a typical Globes head scratcher, and likely due to the appeal of stars Gael García Bernal and Malcolm McDowell. But returning winner “Transparent” was too good in its second season to deny. It will take a well-deserved second Globe in the category.

Who Will and Should Win: “Fargo.” Now that we’re done with that, let us consider “Flesh and Bone,” a show so awful that it was transformed from series to miniseries after the first season was turned in. Starz is quietly making some of the best shows on TV right now. “Flesh and Bone” is not one of them. Only at the Globes would it find itself in this company.

Who Will Win: Curtis and Tomlin are the type of performer the Globes love — old, beloved and super-famous. We’ll give it to Curtis in a toss-up.

Who Should: Rodriguez is a star in the making and Bloom is a talented performer whose show is one of the most unique on broadcast. But Dreyfus continues to be one of the best performers — comedy or drama, male or female — on television, and “Veep” still one of the best shows out there.

Who Will Win: Davis has given a great performance in a show that is uneven and doesn’t exactly go toe-to-toe with the best dramas on cable and streaming. But the strength of her work and the wattage of her star power should be enough to secure her a win.

Who Should Win: Balfe’s performance on “Outlander” isn’t flashy, but it is fantastic. She also happens to be the only true lead in a category that is dominated by women who are either second leads or parts of larger ensembles — and on a show that is distinctly female in tone.

Who Will Win: It’s easy to imagine the movie-obsessed Globes wanting to give Lowe his first major award, but he’s been here before — six times, actually, without winning. Instead count on Stewart to ride the power of his resume, a hilarious performance and his accent to the win.

Who Should Win: Tambor. Ansari deserves recognition for “Master of None,” TV’s best new comedy. But Tambor’s performance on “Transparent” has somehow become even better — even if the show is really a half-hour drama, not a comedy.

Who Will Win: Let’s double-down on that “Narcos” bet here and call it for Moura.

Who Should Win: With respect to Bryan Cranston, Hamm’s performance as Don Draper is the best by any television actor in any role in the post-“Sopranos” world. Never mind that “Mad Men” is over. Hamm should keep getting nominated for it for at least the next five years.

Also Read: 'Making a Murderer' Juror's 7 Takeaways From Inside the Deliberations

Who Will Win: Never mind the fact that her performance was, at best, serviceable. The allure of a Lady Gaga acceptance speech will be too much for Globes voters to withstand.

Who Should Win: Fargo was crammed full of fantastic work by fantastic actors, none more impressive than Dunst, who made a deft career move by signing on for the second season of the Noah Hawley anthology.

Who Will Win: Elba has been on a career hot streak. “Luther” is a strong show and Elba is solid in it, but the most recent season was not the strongest. He’ll be rewarded for it nonetheless

Who Should Win: “Wolf Hall” was one of the best things on television last year, and Rylance was the best thing about it. In a perfect world, he wins in a route.

Best Performance by an Actress in a Supporting Role in a Series, Limited Series or Motion Picture Made for Television

Who Will Win: This is possibly the toughest call of the entire field. Here’s guessing that voters take an opportunity to reward John Ridley‘s “American Crime” and honor King in the process.

Who Should Win: Light has been outstanding on “Trnasparent.” It would be fantastic to see someone other than Tambor and creator Jill Soloway get recognized for the show’s creative success.

Best Performance by an Actor in a Supporting Role in a Series, Limited Series or Motion Picture Made for Television

Who Will and Should Win: Lewis take on Henry VII was bizarre in the best sense — portraying the monarch as a dopey man-child whose yearning for companionship gets overwhelmed by his petulance and constant craving for what’s shiny and new. That’s why he should win. He will win because Globes voters will want to see the former “Homeland” star take a victory lap