The Golden Globes, which splash down at the Beverly Hilton on Sunday, are a bit more unpredictable than the Oscars this year.

And a lot less important.

And maybe a little more fun, although that remains to be seen.

With a host (wild card Ricky Gervais) manning the podium for the first time in 15 years, an event known more for its alcohol consumption than anything else — and a body of about seven dozen star-struck voters who might well opt for a critical flop like “Nine” — the Globes are all about the party. 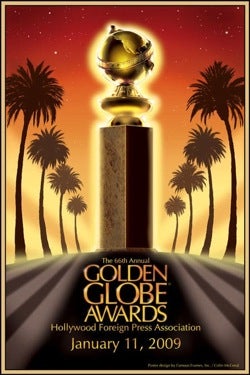 If somebody makes a fabulous acceptance speech – or, on the flip side, a disastrously boring one – a Globe win might have a small effect on that person’s Oscar hopes.

But Academy members definitely don’t look to the Hollywood Foreign Press to tell them what the year’s best achievements were. And they hate the perception that the Globes somehow affect the Oscars.

I still remember how delighted some of the Academy top brass were the morning Oscar nominations were announced in 2000, when three of the Best Picture nominees (“The Sixth Sense,” “The Green Mile” and “The Cider House Rules”) weren’t among the Globes’ nominees.

“Even with 10 slots,” said one happy AMPAS official, “they only got two of our Best Picture nominations.” (Those two were “The Insider” and the eventual winner, “American Beauty.”)

This year, with both groups sporting 10 nominees, I’d say all five nominees in the Globes’ drama category (“Avatar,” “The Hurt Locker,” “Inglourious Basterds,” “Precious” and “Up in the Air”) are assured Oscar nods as well … but on the comedy/musical side, I expect an 0-for-5 showing, since “(500) Days of Summer,” “The Hangover,” It’s Complicated,” “Julie & Julia” and “Nine” are all longshots at best.

Now, you can’t really blame the Hollywood Foreign Press Association if none of their comedy/musical nominees make the cut with Oscar; it’s not as if any other comedies or musicals are going to wind up on the Academy’s slate, either.

So what’s going to win? In forecasting the Globes, it helps to remember that the 84 members of the HFPA association love stars. That means George Clooney probably beats out the more legendary but not-as-hot Jeff Bridges, while they’ll embrace the opportunity to reward both Meryl Streep (comedy or musical actress for “Julie & Julia”) and Sandra Bullock (dramatic actress for “The Blind Side”).

And while “The Hurt Locker” may be the critics’ top choice, and a formidable Oscar contender, it feels too tense and relentless for this group – which is why I suspect “Up in the Air” will pick up a badly needed win, unless the HFPA decides that “Avatar” is too much of a phenomenon to ignore.

Best Picture — Comedy or Musical will be a particularly telling category, since “Nine” would be exactly the kind of movie Globe voters love to reward if it weren’t for the fact that most reviewers have trashed it. They still might vote for it, thumbing their collective noses at the idea of critical respect (hey, it’s not as if this group had any to begin with).

I have a feeling, though, that they’ll go small for once and turn to the indie darling “(500) Days of Summer” instead.

Oh, and Christoph Waltz and Mo’Nique will win the supporting awards, of course.

And then, once the show is over, the talk will turn to what Ricky Gervais said, and who looked drunk when they took the stage, and what everybody was wearing.

Because, when you get down to it, that’s what the Golden Globes are really about.