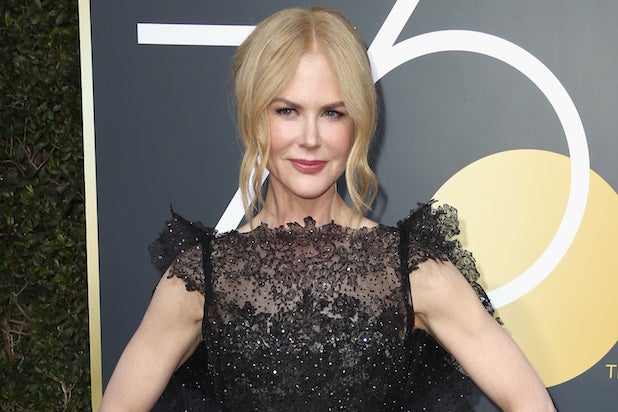 Back up, what was that Nicole Kidman?

During her acceptance speech at the Golden Globes for Best Supporting Actress in a Limited Series or Movie Made for Television for her work in “Big Little Lies,” Kidman kicked off with a line, “First cab off the rank,” which might’ve thrown some of the show’s American viewers for a loop.

The line is an Australian expression meaning, the first person to do, or take advantage, of something. Literally, it’s a taxi in a line of other cabs departing first, but in this case, Kidman used it as an opportunity to be the first (of what will for sure be many) of the evening to address the #MeToo and #TIMESUP movement.

“I do believe we can elicit change through the stories we tell and how we tell them,” Kidman said.

Kidman also paid tribute to her husband Keith Urban during the speech, and several on Twitter felt it was a great way to kick off the ceremony.

Nicole Kidman so what we all needed to hear #TIMESUP #goldenglobes https://t.co/tR2f4lcyhI

Nicole Kidman to Keith Urban: “when my cheek is against yours, everything else melts away; and that’s love.” ????#GoldenGlobes

Thanks for making me cry, Nicole Kidman.

Twitter did take some guesses at what Kidman meant by “first cab off the rank,” so maybe now that she’s won she can sit back and relax.

Nicole Kidman’s “first cab off the rack” idiom means she’s getting the F out of that Beverly Hilton. #GoldenGlobes

Kidman’s “Big Little Lies” co-star Laura Dern also had some thoughts about #MeToo and #TIMESUP while walking the red carpet. Dern said on Instagram that she is “holding our mothers and grandmothers and all brave women who taught us about Voice” by wearing black on the red carpet.

Dern brought along activist Monica Ramirez, who said, “When we learned about what was happening in Hollywood, our members felt very strongly they wanted to send a message … that they are not alone … Part of our work is to fight for gender parity along all lines.”