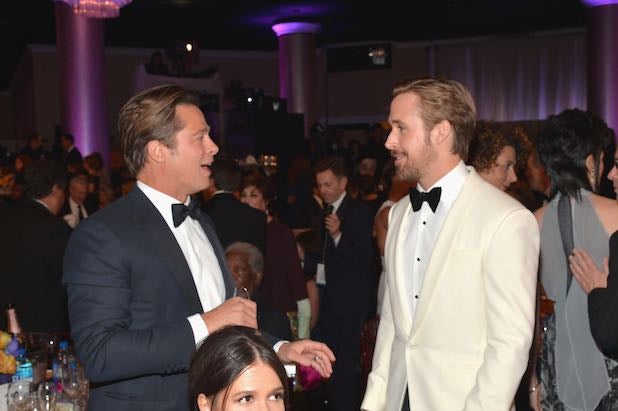 While viewers tuning into the Golden Globes on NBC Sunday saw no shortage of Hollywood stars get ripped by Ricky Gervais, they didn’t get to see any of the behind-the-scenes action that TheWrap’s party reporter Mikey Glazer did.

From the moment the nominees started arriving to the moment they darted for the exit after the last award was handed out, here’s what you didn’t see on TV during the 73rd Annual Golden Globe Awards.

2:45 p.m. – Security is tight!
Sam Smith arrives right ahead of Gael García Bernal and gets a huge pop from the crowd in the bleachers.

People are arriving early. They must be spooked by the warnings about security. Five guys and a dog surrounry car on residential streets in Brly Hills. Everyone has to open all windowse trunk. There are machine guns and Hazmat on the streets of rly Hills.

3:01 p.m. – The Hoff ignores security trying to lend a helping hand.
David Hasselhoff doesn’t realize he dropped his ticket at the start of the red carpet. A hulking security guard tracks him down the carpet to give it back to him, but Hasselhoff passes the guy off as someone just trying to get his attention.

3:18 p.m. – Gina Rodriguez really wants to give her dad some publicity.
The “Jane the Virgin” star asks photographers to hold on as she wants her father to be included in photos on the red carpet.

3:30 p.m. – The host of the show apparently doesn’t need much prep time.
Ricky Gervais is still on the carpet about 40 minutes after he arrived. That’s a lot of mingling for a guy who has to go to work soon.

4:30 p.m. – Stars chow down.
People are actually eating dinner this year. Ken Jeong is done at this point, but director Jay Roach is still forking.

Also Read: Golden Globes by the Numbers: Who Won the Most Awards

4:35 p.m. – Alicia Vikander, the breakout star of 2015, greets every studio executive she sees.
The first big names in the talent pit are all executives. Jeff Shell asks Bonnie Hammer, “Where are your guys? Where is the ‘Mr. Robot table?” It’s a good thing they got oriented. The USA show will go on to win big. Warner Bros. chairman and CEO Kevin Tusjihara joins the group. Alicia Vikander meets nearly every studio head within 2 minutes. Fox CEO Jim Gianopulos reintroduces himself to the “Danish Girl” and “Ex Machina” star with, “Hi, I’m Jim.” NBCUniversal vice chairman Ron Meyer does a minute later. Universal Pictures chair Donna Langley is there too.

4:45 p.m. – Dress assistants are essential in the pit.
Amy Schumer has a woman holding her dress up behind her as she walks through the crowded pit. Behind her, Gina Rodriguez has come over to chat with Laverne Cox, who had her own dress assistant earlier on the carpet.

4:52 p.m. – A waiter almost clobbers the star of “Veep” with dishes.
A waiter drops a huge tray of dinner plates right by Julia Louis-Dreyfus. HBO CEO Richard Plepler is next to her, and ducks. Nobody wants to be near that disaster.

4:54 p.m. – The stars rush to take their seats before showtime.
David O. Russell and Tom Hooper are rushing to seats right before the show starts. The “Joy” director walks in with Jennifer Lawrence. Will Smith stops to chat with Stan Rosenfield before taking his seat.

4:59 p.m. – “Access Hollywood” hosts mingle with major Hollywood players.
Right before the show starts, “Access Hollywood” hosts Kit Hoover and Billy Bush are in the off-camera lounge right off the floor and they run in to WME chiefs Patrick Whitesell and Adam Venit. Bush wants a picture with Kit, and for the WME guys to send it to her agents at CAA. Whitesell waves to the lens.

5:03 p.m. – The stars get a good laugh at the start of the show.
During Ricky Gervais‘ opening monologue, the room loves the cutaway to Harvey Weinstein after the “studio already paid for the Globe” joke. Loudest pop yet.

6:22 p.m. Rocky rules the podium.
After Sylvester Stallone finally wins a Golden Globe, he gets back on the mic during the commercial break to continue thanking people who helped him win it for his supporting performance in “Creed.” “You’re a brilliant brilliant filmmaker,” he tells director Ryan Coogler. He then addresses co-star Michael B. Jordan: “You did it all I just hung for dear life… He deserves all the credit in the world.”

6:34 p.m. Taraji P. Henson loves Saoirse Ronan.
The “Empire” star is in the bathroom line hugging “Brooklyn” star Saoirse Ronan. “I love you, I love you,” Henson says. “You arething.” When the actress emerges from the restroom to see Lady Gaga on stage accepting her first acting honor, Henson shouts, “Yeah, Lady Gaga!”

7:04 p.m. Aaron Sorkin isn’t scared of anyone stealing his latest award.
After winning his second Golden Globe of his career, the “Screenwriter is on the terrace and leaves his prize on a table while smoking with a friend. The award looks like a stray with its owner’s back completely turned. Meanwhile, the off-camera lounge is packed late in the show. Guests are grabbing Lindt chocolates, bottles of Moët champagne, and picking at fruit and veggies.

8:22 p.m. – Hollywood’s leading men hang out while the rest of the guests bolt for the door.

As show is breaking up, actors Ryan Gosling, Harrison Ford, Brad Pitt and Oscar Isaac are hanging back at their front row table and letting the crowd leave before making their way toward the exit.