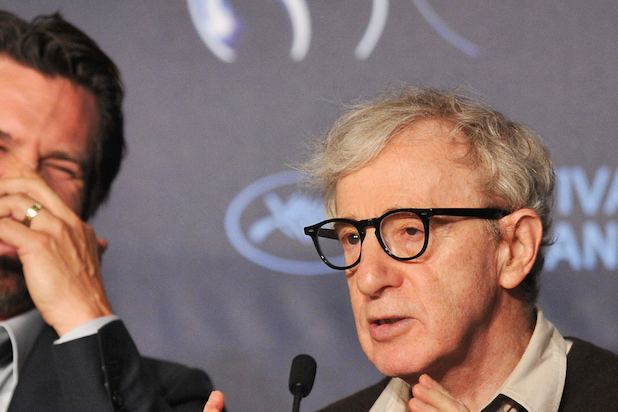 Woody Allen was a no show in Hollywood on Sunday night as the biggest stars in the movie business gathered at the Golden Globe Awards to salute his five decades in show business.

Instead, Diane Keaton picked up the Cecil B. DeMille lifetime achievement award for her “Annie Hall” director, serenading the audience with a creepy/sweet rendition of the children’s song, “Make New Friends.” Allen also missed  his “Blue Jasmine” leading lady Cate Blanchett winning a best actress in a drama award for her performance as an unhinged trophy wife.

So where was Allen?

Katie Couric tweets that the Oscar-winning director, writer and actor was at the opening night of the new Broadway jukebox musical, “Beautiful: The Carole King Musical.” The show’s book was written by Douglas McGrath, who wrote “Bullets Over Broadway” with Allen.

Their film collaboration has been adapted into a musical that will premiere this spring on the Great White Way.

Allen has traditionally steered clear of awards shows. One notable exception was a surprise appearance at the 2002 Oscars when he took the stage to urge filmmakers to shoot projects in New York City, which was recovering from the 9/11 attack.

The director was hailed as a cinematic genius at the Globes, but the Hollywood Foreign Press’ decision to honor Allen had its detractors.

Moments before Allen was recognized, the director’s former companion Mia Farrow tweeted that she was changing the channel to watch “Girls.” The two split in 1991 after Farrow discovered Allen was having an affair with her adopted daughter Soon-Yi Previn. Their messy break-up also involved allegations that Allen molested Farrow’s adopted daughter Dylan — charges Allen denied.

Mia’s son, MSNBC host Ronan Farrow, was more blistering in his reaction to the Globes’ selection of honorees.

“Missed the Woody Allen tribute – did they put the part where a woman publicly confirmed he molested her at age 7 before or after Annie Hall?” Farrow tweeted.