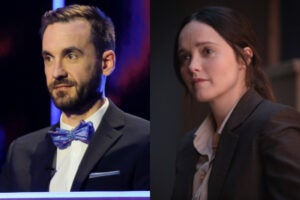 “Good Girls” is back on Sunday for Season 4 — but is that good for NBC?

According to Nielsen, the drama starring Christina Hendricks, Retta and Mae Whitman as three suburban moms taking their power back averaged just a 0.43 Live + Same Day rating last season. That’s definitely not “good” by any traditional measure of TV viewership — but it is also only part of the story these days. And it’s the part NBC doesn’t really care about anymore.

“We didn’t come to this decision lightly, but believe it’s important to accurately reflect how the television business is changing and, specifically, how these early ratings numbers are no longer representative of the performance of a particular show or series,” Stuart Levine, NBC vice president of editorial and media relations for TV and streaming, said in an email to press.

“Long gone are the days when a vast majority of viewers watched their favorite shows in the exact timeslot in which they were scheduled,” he continued. “And as a business, we are much more focused on how audiences are watching our shows rather than when audiences are watching our shows, which could be different depending on the genre and demographics of any given series.”

With seven days of delayed TV viewing, those Season 3 “Good Girls” episodes averaged a better-but-still-just-OK 0.9, so the rating pretty much doubled via DVR. Ten o’clock shows tend to get the most delayed viewing due to their late hour.

NBC is happy to share those “Plus 7” results, but like other networks, the “Good Girls” home believes even Nielsen’s Live + 7 Day numbers are not a full enough snapshot of viewership in 2021. The broadcaster prefers to look at 35-day TAMI (Total Audience Measurement Index) numbers. Those not only count an extra four weeks of catch-up viewing, they also include digital statistics alongside linear measurement.

According to that much more inclusive metric, the third season of “Good Girls” averaged a 2.7 rating among adults 18-49. That is six times better than the show’s Live + Same Day Nielsen average and three times its L+7 average.

The growth from same-day viewing to “Plus 35 Days” makes “Good Girls” NBC’s biggest gainer of any series last season.

The 2.7 is also better than the first two seasons’ TAMI, which averaged a 2.2 and a 2.4, in chronological order. While delayed viewing and digital gain steam — and eyeballs — with each passing year, “Good Girls” has been the only NBC series to grow in 35-day total audience each of the last two seasons.

The specific audiences attracted to these “Good Girls” can be hard to come by. Last season, “Good Girls” had the lowest median age among NBC dramas. In live viewing, the show’s median age is 57. With DVRs, it is 51 and on digital just 33. The show also draws racial diversity to NBC platforms: “Good Girls” is NBC’s highest-indexing scripted series with Hispanic viewers and second among Black viewers (ranking right behind the now-canceled “Lincoln Rhyme”).

Its value extends beyond NBC’s platforms. One day after Season 3 was released on Netflix in the U.S. on Feb. 16, 2021, “Good Girls” was the No. 3 show on the streaming giant. One day after that, the show reached the No. 1 spot, and it hasn’t ranked lower than 8th place on Netflix’s Top 10 since then.