In this morning’s roundup of movie news ‘n’ notes from around the web, SXSW prompts post-mortems, Lionsgate is under siege, and Michael Bay decries “fake 3D.”

Nancy Derwin-Weiss, a Beverly Hills lawyer and former in-house counsel for Paramount Pictures, offers studios what she calls “five simple rules for keeping your movie off the Internet.” Simple is right, since the first three basically boil down to “be really, really careful,” while the last two are essentially “if something happens, take no prisoners.” (The Hollywood Reporter)

“Studios might be willing to sacrifice the look and use the gimmick to make $3 more a ticket, but I’m not,” says director Michael Bay of the 3D conversion process being used on “Transformers 3.” Bay tells Michael Fleming that the conversion, which he’s agreed to test at the insistence of DreamWorks and Paramount, looks like “fake 3D,” and that he’s going to resist unless he sees better results. And if you’re inclined to wonder why he needs to be such a stickler about the quality of the 3D conversion when the previous “Transformer” movies were a little lax when it came to quality control in, say, the script and acting departments … well, Bay has an answer: “People can say whatever they want about my movies, but they are technically precise.” Let’s hear it for precision. (Deadline New York)

Peter Lauria looks at Carl Icahn’s rebuffed bid to take over Lionsgate, and says that some board members actually agree with the corporate raider’s criticisms of the company’s business practices. Lauria’s source suggests that Lionsgate is indeed “top-heavy,” with overpaid top execs charting an expensive, risky strategy – although I have to think that the story’s criticism of the company’s course is a little heavyhanded when it includes in the debit column what it says was “an expensive, unsuccessful Oscar campaign behind ‘Precious.’” I guess the campaign was unsuccessful if you consider anything sort of a Best Picture win a failure – but to my mind, two Oscars (including the biggest upset win of the night, for Adapted Screenplay) and nominations for picture and director have to be considered pretty damn successful for a graphic, grim, low-budget movie from an unknown director. (The Daily Beast) 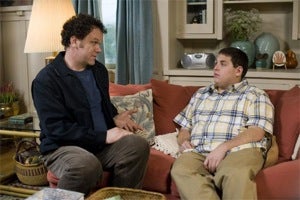 Anne Thompson rounds up the hits and misses of South by Southwest, which she says is “continuing to build its rep as a balmy spring destination for genre fans and cinephiles alike.” By her reckoning, the hits include “Get Low,” “Cold Weather,” “Cyrus” (right) and “Thunder Soul,” the misses “The Girl with the Dragon Tattoo” and “The Runaways.” “The crossover among different groups,” she says, “makes SXSW a heady mix.” (Thompson on Hollywood)

Cinematical does its own roundup of SXSW, which is quite instructive. It includes “Celebrity Sightings,” interviews, and reviews both positive (“The Red Chapel”) and negative (“Amer”) … but under the heading “Deals,” there’s this sad little note: “Nothing to report.” (Cinematical)

From Bermuda, David Poland writes almost 4,000 words on how other writers don’t understand the risks of making theatrical windows shorter. He starts with Edward Jay Epstein’s interview with theWrap, which he terms “part dead on and part ‘huh?’” For Poland, the rush to make windows shorter and find new ways to deliver content post-theatrical is threatening “the one area that, as we move forward, has real upside” – i.e., theatrical distribution, which he says is “the ONLY way to differentiate between what we now think of as Movies and what we now think of as Television.” (The Hot Blog)

Then Poland moves on to Patrick Goldstein’s “significantly less understanding and more short-sighted” L.A. Times piece about how “Alice in Wonderland” offered proof that shorter windows don’t harm theatrical revenues. As I said on Tuesday, I thought that Goldstein’s suggestion of a day-and-date release of a film like “Shutter Island” in theaters or at a video-on-demand premium of about $22.95 was a fantasy; Poland goes further and says that consumers won’t pay it, that the movie will lose money as a result, and that Goldstein “has a massive blind spot” on the issue. (The Hot Blog)

The National, a newspaper out of Abu Dhabi that aims to be a sort of New York Times or Wall Street Journal for the Arab world, writes about the role of Arab money in film financing. The consensus of their experts: investors should be looking not to Hollywood, but to European films and to independent movies, not big-budget productions. “I think Arab money should be going to help finance the Jeremy Thomases of the world and the Harvey Weinsteins of the world,” said Quinta Communications chairman Tarak Ben Ammar. (The National)