In this morning’s roundup of Oscar news and notes from around the web, “Up In the Air” gets a big cover and Judd Apatow has delusions of Oscar.

More Golden Globe presenters: Nicole Kidman, Steven Spielberg and Sam Worthington. The headline of the press release announcing the new presenters helpfully points out, in a parenthetical, that Worthington is in “Avatar.” (Hollywood Foreign Press Association)

“The Oscar Race Is On!” proclaims Entertainment Weekly, in the issue that hits newsstands on Friday. In addition to the annual “25 Movies to See Before Oscar Night” list (which always contains at least one or two films that end up without any nominations), the issue contains predictions … and, on the cover, a trio of acting contenders from “Up in the Air”: George Clooney, Vera Farmiga and Anna Kendrick, the last of whom is so glammed-up that she doesn’t look anything like she does in the film. (Pop Watch) 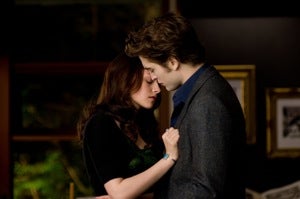 The 10 most-watched trailers of 2009, according to Yahoo! Movies. By my count these 10 will probably get 15-20 Oscar nominations between them, but almost all will go to the number nine and 10 films on the list, “Avatar” and “Up.” As for the rest (“2012,” “Transformers,” even “Star Trek”), I expect visual effects and sound nods, but not much else. And number one, “The Twilight Saga: New Moon” (left), is definitely not an awards kind of movie at all. And then there’s “Mega Shark Vs. Giant Octopus.” (Yahoo! Movies)

Rebecca Keegan says that with 10 best-picture slots available, “Oscar Delusions Abound.” But her story doesn’t really take anybody to task for running a deluded camaign – except, perhaps, "Funny People" director Judd Apatow, who gets a big picture. (Vanity Fair)

Perhaps tired of roundups of 2009, Sara Vilkomerson stands up for 2007 as a classic year for cinema. Oscar winner “No Country for Old Men,” “There Will Be Blood,” “Michael Clayton,” “The Assassination of Jesse James by the Coward Robert Ford,” “The Diving Bell and the Butterfly,” “The Bourne Ultimatum” … And she doesn’t even include “I’m Not There” or “Once.” Funny, my son has been telling me the same thing for weeks. (The Awl)

Anne Thompson dips her toe into the waters of Oscar ballot counting, pointing out that the best-picture nominees will be the films voters feel passionate enough about to rank at the top of their ballots. She thinks she knows the top seven (“Avatar,” “The Hurt Locker,” “Precious,” “Invictus,” “An Education,” “Up in the Air” and “Inglourious Basterds”), but is confused as to what will make the cut after that. (Thompson on Hollywood)

Variety talks about the etiquette of awards screenings, and the expectations of guild and Academy members that they’ll see every movie for free this time of year. (Variety)