In this morning’s roundup of Oscar news ‘n’ notes from around the web, Kathryn Bigelow takes the lead and Carey Mulligan has great toes.

Sasha Stone considers the race in light of Kathryn Bigelow’s DGA win: “In a year with ten Best Picture nominees and a desire to up the ratings, it seems even more shocking that this tiny film, this brilliant, unforgettable masterpiece is making its way through a very difficult awards season and coming out the winner.” She doesn’t jump the gun in predicting an Oscar victory, though; hers is a more thoughful thoughtful analysis that calls “The Hurt Locker” a “bonafide frontrunner” but gives “Avatar” a lot of credit and foresees a tight race. (Awards Daily)

Entertainment Weekly reports on the DGA Awards, with a few words from Bigelow’s acceptance speech and a lot of emphasis on Brad and Angelina. Perfectly understandable, I guess. (EW.com) 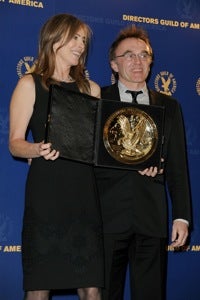 Sony Pictures Classics announces that it has acquired rights to “Winter in Wartime,” the Dutch entry in the Oscar foreign-language race. With the acquisition of the World War II drama, Sony now has four of the nine films on the foreign-language shortlist – and all four are among the likeliest to make the final group of five nominees. (The others are “The White Ribbon,” “Un Prophete” and “El Secreto de Sus Ojos.”) (indieWIRE)

David Poland looks at matters with seven weeks to Oscar, and decides he “couldn’t be happier” with the move to 10 nominations. He also says (rightly, I think) that beyond the top several slots, we pundits really have no idea what’s going to be nominated. Then he does what I did a couple of weeks ago: he takes the Top 10 lists he’s compiled on his site, treats them like Oscar ballots and tabulates them using the preferential system. I think his process is a little off (when he recalculates the “magic number,” he doesn’t seem to take into account the obscure but important surplus rule), but he comes up with pretty much the same result I did: “The Hurt Locker” and “Up in the Air” come out on top, followed by “A Serious Man,” “Inglourious Basterds,” “Up” and “Fantastic Mr. Fox.” (Movie City News)

This is what you call stacking the deck. In the L.A. Times, Stephen Farber writes a story headlined “Some Oscar Hopefuls Aren’t Up to the Gold Standards of Their Past,” in which he compares 2009 films to similar ones from the past in order to prove that “the quality of movies has not kept pace with the soaring grosses, to put it mildly.” But none of the films he lists are Best Picture frontrunners, and the past he’s drawing from to denigrate the current films he does pick is the whole of cinematic history, going back to 1939. “Where the Wild Things Are,” he informs us, is no “Wizard of Oz,” “It’s Complicated” is no “Philadelphia Story,” “Public Enemies” is no “Bonnie and Clyde,” “Crazy Heart” is no “Tender Mercies.” No kidding. And if 2009, or any year, had given us films on a par with all of those classics, it would have been one for the ages. (24 Frames)

Tom O’Neil offers his “fearless, peerless, 100% perfect Oscar nomination predictions.” I’d be inclined to make fun of his certainty, but I pretty much agree with most of his picks, with only minor differences in the Supporting Actress and screenplay categories. I will point out, though, that these predictions come two days after he explained why James Cameron would definitely win the DGA Award over Kathryn Bigelow. Tom then termed Bigelow’s win “shocking,” although 20 of the 29 pundits he polled predicted it. (Gold Derby)

Roger Ebert forecasts the Oscar nominations, too. He thinks Sandra Bullock is a now a sure thing to win Best Actress, that “The Blind Side” is a virtual lock for a Best Picture nomination, and that “Bad Lieutenant” has a chance as well. (rogerebert.com)

Newsweek holds an “Oscar roundtable” with six actors: Jeff Bridges, Sandra Bullock, Morgan Freeman, Woody Harrelson, Carey Mulligan and Gabourey Sidibe. It turns out that many of them (including Ms. Mainstream, Bullock) have serious qualms about “Avatar,” and whether the motion-capture technique really allows for acting. At the end of the conversation, we discover that both Bridges and Freeman have been staring at Carey Mulligan’s toes, which are apparently quite flexible. Some of what ensues is on video, below. (Newsweek)