In this morning’s roundup of Oscar news ‘n’ notes from around the web, Tarantino talks, and Anna Kendrick uncovers the secret woe of the Oscar nominee.

Scott Feinberg talks to Quentin Tarantino at the Santa Barbara Film Festival. Tarantino discusses his technique for sneaking into movies; the ways in which the video store was his college; why he won’t know which of his movies is the best until after he retires; and how Pauline Kael was “the hippest chick on the block,” though he phrases it a bit more colorfully than that. Plus other stuff. (And the Winner Is … ) 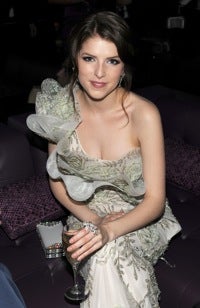 The hidden downside of Oscar nomination euphoria, courtesy of a tweet from Best Supporting Actress nominee Anna Kendrick (left): “It’s a week since oscar noms came out and my place is starting to look like a graveyard of floral arrangements. Sad face.” 95,000 followers feel her pain. (Twitter) (Photo by Frazer Harrison/Getty Images)

James Cameron has been working hard lately to sell the notion of “Avatar” as not just a spectacle, but also an environmental message-movie. (It’s definitely both things, of course, but it wasn’t as important to promote the latter aspect when the goal was big grosses rather than awards.) The latest pitch comes in an interview with the Yahoo! Oscar blog, where he tells Mike Ryan that 20th Century Fox initially told him, “We really like the story … But … is there a way to not have so much of this tree-hugging, ‘Ferngully’ stuff in it?” Cameron told them that the tree-hugging stuff was the whole point. (Yahoo! Movies)

On the other hand … The Oscars are a con, the nominees “a parade of propaganda, stereotypes and downright dishonesty,” and today’s filmmakers “pimps for a world view devoted to control and destruction.” So says investigative journalist John Pilger, who eviscerates “Avatar” and “The Hurt Locker” and “Invictus” and “Up in the Air,” with stops along the way to mock “The Deer Hunter” and “Black Hawk Down” as well. If you’re tired of the far right bashing Hollywood, here’s some far-left bashing to even the score. I tend to agree with the anonymous commenter who says, “you’ve managed to take a slew of films which in many ways embrace deeply progressive ideas … and then focus on the one political aspect that bugs you, dismissing them all.” (truthout)

Mary McNamara thinks the Oscars should take their cue from the Super Bowl, since that telecast just got record-breaking ratings. Or maybe she doesn’t really think that, since her suggestions about how to improve the Oscars by making them like the Super Bowl are pretty nonsensical. Peyton Manning and Brett Favre presenting Best Director? A halftime show? A color commentator? (Actually, the show tried that a few years back, but poor Chris Connelly didn’t have the time or the leeway to actually say anything interesting.) And her last suggestion – “take a look at some post-game interviews and man the heck up” – makes absolutely no sense at all, since the only thing more cliché-ridden and predictable than a backstage awards-show interview is a post-game chat with any athlete. But then, I guess this is supposed to be a humor piece. (Los Angeles Times)