In this morning’s roundup of Oscar news ‘n’ notes from around the web, pundits predict and the Oscar producers pull out their stopwatches.

Dave Karger predicts the Oscar winners in eight marquee categories. Most of his picks pretty much go with the conventional wisdom: “The Hurt Locker” for Best Picture, Kathryn Bigelow for director, Jeff Bridges, Sandra Bullock, Christoph Waltz, Mo’Nique in the acting categories. He thinks favorite “Up in the Air” will win for adapted screenplay, and says the closest race is between “Hurt Locker” and “Inglourious Basterds” for Original Screenplay. He’s thinking Mark Boal pulls it out for “Locker.” (Oscar Watch)

“At the Movies” co-hosts Michael Phillips and A.O. Scott predict winners, too. And there’s a contest involved, where if you out-pick the critics you can win a 46-inch HD TV or a Blu-Ray player with 25 discs. They only pick six categories – the four acting races and the two screenplay ones – and agree on three of them: Bridges for actor and Waltz and Mo’Nique for their supporting roles. The differences come in Best Actress (Phillips goes for Bullock, Scott for Meryl Streep) and the screenplay categories, where Phillips foresees wins for “Inglourious Basterds” and “Up in the Air,” while Scott think it’ll be “The Hurt Locker” and “Precious.” (At the Movies) 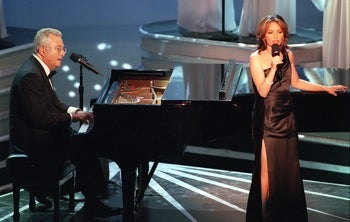 Michael Cieply talks to Oscar producers Adam Shankman and Bill Mechanic. They reveal some Oscar-show math: the 24 awards presentations will be allotted four-and-a-half minutes each, and the 13 “acts” – which Cieply says means “the singing, dancing and jokes” – get a total of 31 minutes. I just checked a rundown from the Oscar show of two years ago (the second of the two Oscar shows hosted by Jon Stewart, and one that came in under three-and-a-half hours) and the awards were actually allotted less time than that – but the extra entertainment had topped 31 minutes by the halfway point in the show. And apparently, Mechanic and Shankman plan to show clips from the Best Picture nominees, something that hasn’t been done on an Oscar show in years. (The New York Times)

Kirby Holt runs down the Best Original Song Category, and guesses how we’ll see the songs performed on the Oscar show: one medley containing the two “Princess and the Frog” songs by Randy Newman (above, with Susanna Hoffs at the 73rd Oscars); another medley with the French song “Loin de Paname” and the "Nine" song “Take It All” (sung by French actress Marion Cotillard); and “The Weary Kind” all by itself, sung by Ryan Bingham with, perhaps, the help of Jeff Bridges and Colin Farrell as well. I’d be a little surprised to see Farrell, but otherwise I’ve been thinking along the same lines. (Movie Dearest)

The Gurus of Gold consider an essay question: what, if anything, has changed since the nominations were announced? Most of us don’t see any major shifts, though Anne Thompson thinks James Cameron might pull a Best Director upset, and David Poland theorizes that the percentage of Academy members who’ve seen “The Hurt Locker” has jumped from 40 percent to 90 percent. If accurate, that would be extraordinarily significant, as it removes one of the very few remaining obstacles to a “Hurt Locker” Best Picture win. (Movie City News)

Kris Tapley surveys the final weekend of the Santa Barbara International Film Festival, from the producers panel, to a screening of the documentary “South of the Border” and Oliver Stone Q&A, to the Saturday evening tribute to Colin Firth. Sounds like the most fun came when Jon Landau (“Avatar”) and Lawrence Bender (“Inglourious Basterds”) had a disagreement over enlightenment vs. entertainment. Landau’s in favor of the former, while Bender’s happy with the latter. (In Contention)

Scott Feinberg also attended the Firth tribute, and spent half an hour doing a video interview with Firth before the festivities began. Firth says that if he had to do it all over again, he might not have taken the role of Mr. Darcy in the BBC production of “Pride and Prejudice,” although that’s the role that put him on the map for many people (and made him an Anglophile’s sex symbol to boot.) (And the Winner Is … )

Well, this is just bizarre. On the West Bank, protesters against Israel’s separation barrier paint themselves blue and dress as the Na’vi from “Avatar.” The Telegraph has a photo. (Telegraph.co.uk)